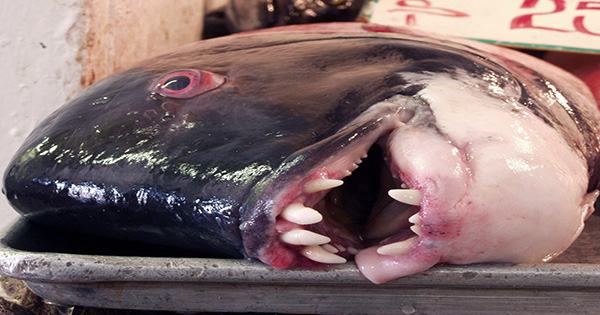 Fish with Human-Like Teeth Reeled in On North Carolina Coast

Sea last week provided the perfect view at Janet’s Pier in Nags Head, North Carolina, as a lamb placed a set of pearl white bunches to challenge a dentist in a sheep’s head fish (Archosargus probatocephalus). Sheepshead fish are famous for their teeth, strange as humans, which they use to grind the shells of mollusks and crustaceans.

Although these craters, fishing for food, pose no threat to wild people, they can use their three rows of teeth when handled – when it seems fair enough. They look like they are also known as criminal fish when they see a prisoner wearing a striped uniform.

Shaped fish do not start life with these teeth. Young people start with mouths that are usually attached to fish (without teeth), which they use to find soft-bodied animals like worms. The lamb, which gives its name to its sheep because of its tooth-like resemblance to the sheep’s mouth, does not last until the fish is more mature. The bigger and bigger the fish, the more prominent its teeth will become, and – just to add scare – the front set will even create an enamel layer like our teeth!

With a face that a mom can really love, you might not find this wonderful fish so hungry – but they are said to be quite tasty. The fish that came back into the fish above, probably, was so happy to catch them. However, managing this kind of fish brings dangerous warnings because it has convinced people in Snoops that if you get their bad side they can give quite a surprise. That said, if you try not to pick them up from the sea and on a plate, they are very cool.

“I wouldn’t hesitate to swim in the water inhabited by these fish,” David Catania, collection manager at the California Academy of Sciences, told Snoops. “They do not pose a threat to humans unless they are harassed. Since they are good to eat, anglers aim at the sheep’s head, so handling one after catching it creates the possibility of being bitten or bitten by insects with their sharp dorsal fins.” So, the sentence I made is, “If you want to live and succeed, throw that weird thing into the sea.”