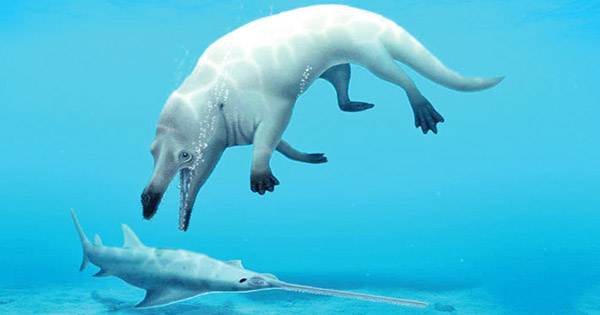 Four-Legged Whale Discovered In Egypt Named After Anubis, God of the Dead

The ancestors of modern whales were deer-like animals who had had enough of life on land and ventured into the sea. Many changes of the whale body plan occurred during their development, which saw them evolve over 10 million years into the legless giants we know today, and a new one has been reported in the new research. It was three meters (9.8 feet) long and weighed 600 kilos, and was named Phiomicetus Anubis, after the jackal-headed Egyptian god of the dead (1,323 pounds). It was probably at the top of the food chain.

The work, which was published in the journal Proceedings of the Royal Society B, uses a fragmentary skeleton found in Egypt’s Western Desert to create a picture of P. Anubis. It took a long time to be discovered, having lived roughly 43 million years ago, but now that it has, it’s making quite an effect on academics. According to research author Abdullah Gohar, Phiomicetus Anubis is the most basal (primitive) protocetid whale known from Africa, based on a fragmentary skeleton.

“Phiomicetus was most likely a top predator in the community it lived in, similar to a killer whale today, according to Gohar.

Whales became so watery, according to one idea, because their ungulate progenitors began foraging near the water’s edge. When disaster came knocking, they were well-positioned to hide in the shallows, and as they spent more time in the water, their bodies began to change.

Their search for a new ecological niche resulted in a series of adaptations, including the loss of their legs and the transformation of their arms into the renowned cetacean flippers. Some aquatic adaptations had already begun to appear in P Anubis however, they were significantly more complex.

“It features a more extended temporal fossa, larger third lower incisor, and longer articulation area between the mandibles than earlier whales,” Gohar explained. “These modifications point to a predatory animal that outperformed its relatives.”

P. Anubis, unlike its grazing relatives, was a formidable predator capable of capturing huge prey, equivalent to a killer whale. The notion of P. Anubis with its four limbs swimming around in the oceans, along with the toothy remnants that prompted its resemblance to a jackal-headed god, does not offer an image of a sea in which you’d want to be.