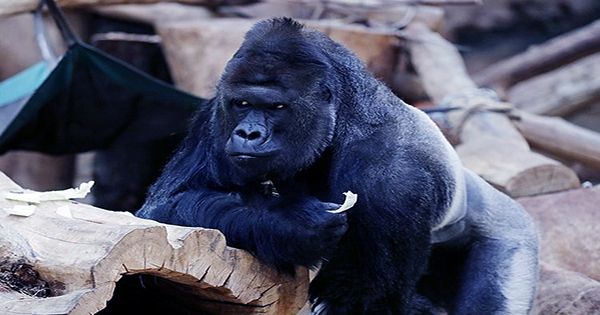 The gorilla that became famous after posing for a selfie died “in the loving arms” of the ranger who rescued her as an orphaned child. Ndakasi, a mountain gorilla in the Democratic Republic of Congo (DRC), died on September 26th at the age of 14 after a protracted illness. The gorilla died in the arms of her keeper and close companion, Andre Bauma, according to Virunga National Park.

Ndakasi and another female mountain gorilla named Ndeze gained notoriety in 2019 after they seemed to photobomb a selfie taken by another anti-poaching ranger, Mathieu Shamavu, in the DRC’s Virunga National Park. The rangers believe the gorillas were imitating their human caregivers by standing straight with their bellies out. The shot rapidly went viral after the Virunga National Park released it on Instagram in April 2019. “We’ve received lots of messages about the photo,” they stated in the description. Yes, it is true! Those gorilla ladies are often playing naughty, so this was the ideal shot to capture their true personalities!”

Ndakasi had an interesting life even before his brush with fame. Ndakasi was rescued at the age of two months after rangers discovered her clinging to the lifeless body of her mother, who had been shot at close range by an armed militia just hours before as part of a series of gorillas family killings. The rangers rescued the baby gorilla and took her to a rehabilitation clinic, where she met Andre for the first time. The two became inseparable very fast. “We slept in the same bed, I fed her, I played with her… I may claim to be her mother “In a 2014 interview with the BBC World Service, Andre stated.

Ndakasi got serious pneumonia as an infant, only two weeks after being placed in her care, and the young gorilla became feeble. Against all odds, she made it through. Ndakasi lived happily with her rangers and other orphaned mountain gorillas, despite being too vulnerable to return to the wild. Mountain gorillas were extremely endangered when she was born in 2007, and they were under a lot of strain from poachers and civil war. The situation for mountain gorillas is still difficult, but the species is currently in a far better position. During Ndakasi’s lifetime, the population of the species grew by over half, from 720 individuals in 2007 to a projected 1,063 in 2021.

Ndakasi died tragically at a young age (captivity gorillas can live for up to 50 years), but the rangers at Virunga claim her spirit of survival and tenacity lives on in the national park. Andre said in a statement following the gorilla’s death, “It was an honor to support and care for such a loving creature, especially knowing the pain Ndakasi faced at such a young age.”

“It was Ndakasi’s kind personality and intelligence that made me comprehend the relationship between humans and Great Apes, and why we should do everything we can to conserve them,” says the author. I am honored to have Ndakasi as a friend. “I adored her as if she were a child, and her upbeat personality made me grin every time I saw her,” he continued. “All of us at Virunga will miss her, but we will be eternally grateful for the richness Ndakasi gave to our lives during her stay at Senkwekwe.”