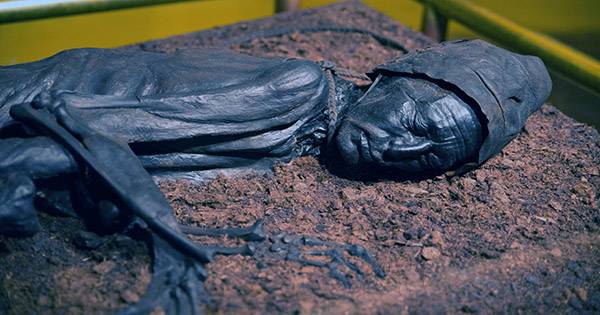 Guts Reveal the Last Meal of Incredibly Preserved Bog Body from 2,400 Years Ago

About 2,400 years ago a very unfortunate man was killed, probably as a human being, and was thrown into a Danish bug. Fortunately for us, this unusual death meant his body was naturally paralyzed and left in a significant state, providing clear insights into his appearance and lifestyle.

In a new study published in the journal Antiquity, researchers were able to manage the last meal together by looking at the contents of even the most adventurous – parasitic worms and everything. Known as Tolund Man, the bog was discovered by pit diggers on the Danish island of Jutland in the 1950s. Immersed in the cold, acidic, and low-oxygen conditions of Pete Bug, most of his skin and limbs remained surprisingly intact, with a painful expression on his face and a lump still around his neck.

The man’s features were so well preserved; the investigation initially suspected that the body belonged to a local boy who had recently gone missing. A large part of his gastrointestinal tract, as well as its contents, were found in preserved condition. In a new study, researchers from the museum Silkberg and the National Museum of Denmark have used the latest technology to reconsider the contents of the famous Tolund Man’s stomach.

Their analysis revealed traces of cereal and wild plants – including barley, flax, gold-enjoying seeds, and pale persicaria seeds. – Which was probably eaten in his gastrointestinal tract? Evidence protein shows that he also recently ate fish. On top of this diet they found 16 plant species, although it accounted for less than 1 percent of the total stomach content. All in all, they believe his last meal was a fairly common Iron Age meal of fish and yogurt, probably cooked about 12 to 24 hours before death.

“We can now redesign the recipe for Tolund Man’s last meal. Dr. Nina H. Nielsen, a top researcher at the Danish museum Silkberg, said in a statement that the food was quite nutritious and was a combination of pale persicaria and barley porridge with some seeds of discipline. “Thus, we have come very close to a certain situation in the past – you can almost imagine how they were preparing barley porridge and fish sitting by the fire,” Dr. Nielsen added.