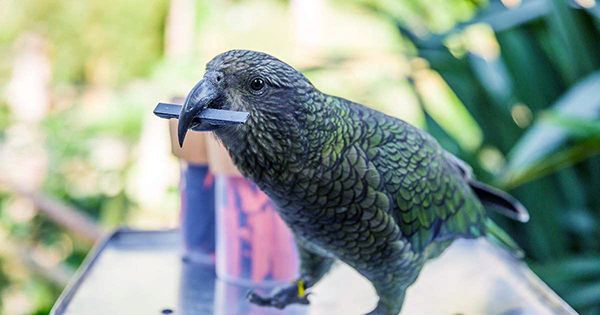 Kea parrots cannot tell the difference between virtual and real-world surroundings, according to an intriguing study involving tongue-wagging birds, balls, and touchscreens. They put the parrots through a number of exercises to figure out where a ball had gone after teaching them to use touch screens with their tongues (amazing that this isn’t even the meat of the study).

The birds appeared to be unconcerned as the researchers switched between virtual and real-life objects. The latest study, which was published in the journal Biology Letters, shows how keas see digital and real-world surroundings as continuous and equal, although other animals (such as humans) can distinguish the two apart. Existing research shows that this distinguishes keas from 19-month-old human babies (apart from the feathers and beak thing), because babies do not appear to sense virtual settings spilling into real life the way parrots do.

The researchers enlisted the help of a group of keas from Willowbank Wildlife Reserve to work on touch displays. This year, another important news story about a bird named Bruce who learned to exist without a beak by manipulating tools with his tongue and lower jaw highlighted the kea’s versatile tongue. Thankfully, the kea tongue was up to the challenge once more.

In a statement, study author Patrick Wood said, “A parrot’s beak is similar to your fingernail: it won’t trigger a touchscreen.” “As a result, we had to train them to use their tongues to lick the screen.” They quickly gained confidence using the touchscreens once they mastered this ability, and they appear to like it as well.”

The next stage was to have them follow a ball on a real-life seesaw and then figure out which box the ball had dropped. They achieved this in real life by signaling which box the ball was in with their beaks. The same problem then evolved to include a virtual seesaw rather than a physical one, and the parrots chose the box they thought the ball was in by touching it on the screen with their tongue. The birds were then presented with a virtual seesaw that concluded with real boxes from which to choose.

The purpose was to see if the keas believed that physical actions taking place in a virtual environment had spilled over into the actual world and that, the ball on the screen had moved to the box in front of them. The parrots would tap the box that the on-screen puzzle had to lead them to, indicating that they did. The fact that they see the virtual and real worlds in this way could lead to more behavioral research with these animals, according to the researchers.

In a release, lead scientist Amalia Bastos said, “Our study confirms the use of virtual reality and tasks integrating the real and virtual worlds for use with this species.” “This could have consequences for other parrot species as well.”

However, as delightful as it is, the tablet-wielding-parrot study has several limits when it comes to assuming its long-term appropriateness as a research instrument. “More research is needed to see if kea with significant screen experience starts to separate the real and virtual worlds, and what types of experiences might bring their knowledge of screens closer to that of human neonates,” Bastos said.