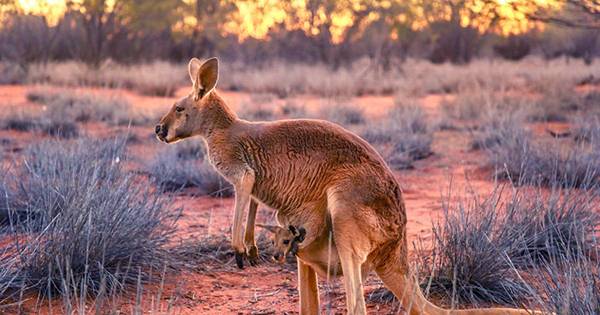 The oldest known indigenous rock painting has identified in Australia and – not surprisingly – it is a kangaroo painting. These studies detailed in a new study published today in the journal Nature Human Behavior. Researchers are currently researching a treasure trove of rock art found at eight rock art sites in the Kimberley area of ​​Western Australia. This art gallery includes animals depicting snakes, a lizard-like figure, and murals of various colors, including three macropods (the iconic family of marsupials, including kangaroos, wallabies, and quokkas).

Together with the site’s aboriginal Traditional Historian owners, scientists at the University of Melbourne set out to set the date for the artwork in an effort to unravel a more detailed timeline of this creative activity. However, determining the dates in these paintings is not an easy feat, since ancient aboriginal artists often painted using ocher pigments made from iron oxide, which cannot easily dated because they contain no organic matter. To overcome this obstacle, the researchers leaned towards a knowledgeable tested and tested method: instead of dating the painting, they wrote down the remains of ancient mud waste houses that had painted. By dating the waste houses above and below the painting, the kangaroo national artwork dated 17,500 to 17,100 years ago, making it one of the oldest painted figures in Australia.

“This has turned the painting into one of Australia’s most famous in-situ paintings,” said Dr. Krishna Kumar, a postdoctoral researcher at the University of Melbourne and lead author of the study. Damien Finch said in a statement. The kangaroo painted on the opal ceiling of a rock shelter on the Unghango Group Estate in the Balanggarra country in the Kimberley region of northeastern Western Australia. In addition to its significant age, the style of painting also attracted the attention of researchers. Its life-size scale and subjects are typical of the irregular infill animal or naturalist period. As the researchers explained, it gives some valuable insights into the culture of those who painted this piece and even raises the possibility that old works may still be in Australia.

“This is a significant discovery in this initial hypothesis. We can understand something about the world in which these ancient artists lived. We never understand what the artist thought when he painted this work for more than 600 generations. Previously, but we know that the naturalist period extended into the last ice age, so the environment was cooler and drier than it is today,”Dr. Finch explained. “This iconic kangaroo image is visually identical to the paintings of the islands of Southeast Asia more than 40,000 years ago, suggesting a cultural link – and pointing to the still old rock art in Australia,” added Dr Sven Ouzman, one of the project’s organizers. The University is the lead investigators at the Western Australian School of Social Sciences.

Multiple old decorative images have rediscovered in recent times beyond Australia. Just last month, archaeologists emerged as the oldest metaphorical work of art created by the human body: a 45,500-year-old doodle of a fat-pig.