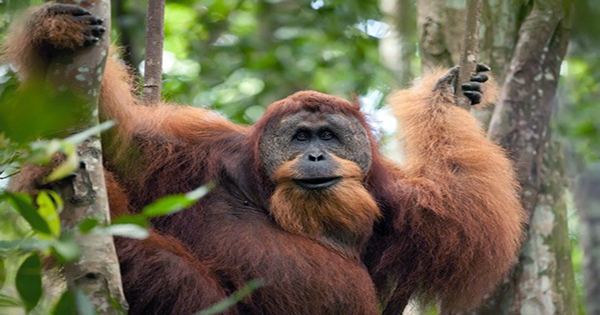 According to a review of hundreds of paintings done by five female orangutans at Tama Zoological Park in Japan, nonhuman primates may make art that represents their own unique personalities and emotions.

The researchers describe the primates’ works in the journal Animals, noting that certain orangutans’ sketching technique changes with the seasons, presumably indicating variations in their mental state.

The five artists are given sketching tools to supplement their daily activities, and between 2006 and 2016, they produced around 1,500 drawings. Molly, a highly creative orangutan, created the great bulk of these pieces, which were renowned for their sophistication in compared to the drawings of her fellow primates.

The authors of the current study examine 790 of the orangutans’ drawings, as well as 656 of Molly’s. “The sketching activity of these five orangutans is not random,” they discovered, “and variances among individuals may represent differences in styles, states of mind, and desire to draw.” The colors were chosen by each orangutan, as well as the forms they chose to draw and the quantity of canvas area they covered revealed their own creative tastes. Molly’s paintings, for example, had less contrast than the other animals’ because she pressed her crayons on the canvas more softly.

“The drawings by Molly were the most sophisticated (more richly filled than those by other persons, with the use of more forms and colors), followed by those made by Yuki,” the researchers conclude after comparing the five artists. Kiki set herself apart from the others with her basic yet boldly defined drawings (i.e., one color, forceful pressing on the crayon).”

The writers also documented fluctuations in Molly’s artistic output as the seasons changed, which is fascinating. For example, in the spring, she favored purple as her dominating hue, whereas, in the summer and winter, she favored green. Meanwhile, the color red was set aside for photographs taken when another orangutan gave birth. Molly’s summer drawings included more “loops” than her winter drawings, which the researchers believe “maybe a cue suggesting a high attitude owing to the weather and the presence of more guests.”

The orangutans used three fundamental motifs to decorate their canvases: loops, circles, and “fan designs,” according to the study’s authors. Other non-human animals, such as chimps, have been spotted using similar sketching methods, and human youngsters employ these structures in their artwork. “Drawings by chimps, humans, and orangutans thus have a lot in common,” the researchers conclude, adding that their findings may “provide some hints concerning the development of drawings in humans.”