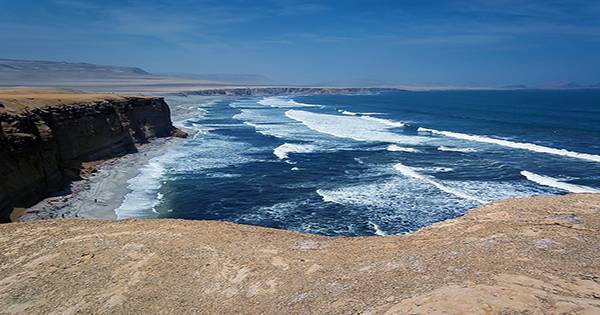 The Schmidt Ocean Institute’s research vessel Falkor discovered two fields of previously undiscovered volcanic vents off the coast of La Paz, Mexico, and the wonderlands that surround them in just 33 days.

Along with dazzling blue worms and calcite spires that resemble cave-floor stalagmites, the mission discovered six kinds of creatures that have never been seen before by humans.

Hydrothermal vents are the closest we can get to extraterrestrial habitats without having to leave the planet. Furthermore, because many scientists believe they gave the first spark of life, they may be able to tell us where we originated.

The Pescadero Basin, which straddles the Baja California peninsula and the Mexican mainland, is home to a slew of vents whose high temperatures and chemical abundance allow life to thrive where the boiling waters cool. Because the fluids they spew out are transparent, rather than the dark look that lends most hydrothermal vents their nickname “black smokers,” the vents are unlike any others seen across the world. As a result, while any unknown hydrothermal vent might have species we have never seen before, these are the most likely candidates.

The investigation discovered 10 species previously identified from vents outside the Pescadero Basin but never observed within it, as well as six species that have yet to match to a record. Arrow worms, crustaceans, mollusks, roundworms, and polychaetes are among the latter (bristle worms). In 2015, the Auka vent field was found, and in 2018, the JaichaMaa ‘jag field was identified. Now, on its final mission for Schmidt before replaced, the Falkor has discovered Maija awi, a pair of vents halfway between them, The ‘Melsuu vents to the south of JaichMaa ‘ja’ag also discovered.

Some people mistake Maija awi for a dragon, and she was given the name of the water serpent in the Kumiai people’s origin narrative. Melsuu which is known for its abundance of vivid blue worms, derives its name from the Kiliwa language of the peninsula’s original inhabitants, Because missions like this generate so much data to examine, it normally takes years for the results to be published in peer-reviewed publications, hence none of the species discovered have yet been named.

“We have covered an unprecedented area of nearly 20,000 square kilometers between the 2018 and 2021 Gulf of California expeditions, which is about 1/8th of the total surface area of the Gulf of California,” said Co-Principal Investigator Dr. Ronald Spelz-Madero of the Autonomous University of Baja California in a statement. Because the Gulf of California is changing so quickly, it is a great area to study how continental edges emerge. The mission’s goal was to determine if the newly discovered vents and those discovered on prior trips were all supplied from a single reservoir, in addition to examining the chemistry and biology of the vents.