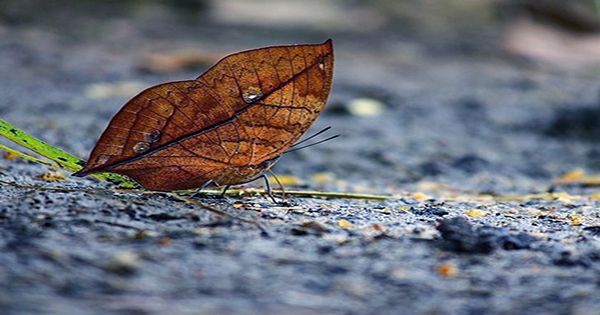 This Dried Up Bit Of Foliage Is Actually Alive, Meet The Dead Leaf Butterfly

Camouflage is a common defense system in the animal kingdom but undoubtedly, some are better than others are perhaps one of the most impressive is the dead leaf butterfly, also known as the orange or Indian oakleaf (Kallima inachus). These fascinating and gigantic butterflies are seen migrating from India to Japan in tropical Asia and bringing about a double life. On the one hand, they vibrant shades of blue and burnt orange with black tips and on the other, they look like dead leaves.

The striking camouflage is undoubtedly impressive, but how can anyone start as a butterfly and end up like a dry shower? In line with Church Darwin’s theory of evolution, he wrote in the Westminster Review in 1867 that the imitation these pages was researched by naturalist Alfred Russell Wallace. “But the most striking and suspicious aspect of the protective similarity between butterflies that we have seen before is that of the common Indian Kallima inachis…” Exactly how the mystery of his day was.

Recently, scientists have found evidence of four distinct intermediate forms of KM Inches before this method of camouflage was developed. Over time, these butterflies saw small changes in their wings, as well as 45 closely related species, and they were able gradually gather the most complete evidence of the introduction of a means of mimicking evolution. They found that multiple related species shared a rough plan on their wings, suggesting that duplicates of the leaves too inherited across all species.

“Leaf mimics in butterfly wings provide an interesting example of complex adaptive features and create speculation about how wing patterns develop close resemblance to leaves from ancestral forms that do not resemble leaves,” the study authors wrote. “The types of leaf imitations are slowly changing, suddenly, evolving from mimetic [no imitative] ancestors. Through a lineage of Kallima butterflies, leaf patterns emerged through the temporary collection of orchestrated changes of multiple pattern elements.

The common baron caterpillar (Euthalia aconthea) is a similarly skilled camouflage critic native to India and Southeast Asia. Instead of dead leaves, E. aconthea blends seamlessly with the yellow, green leaves. Little larvae live solitary lives on top of mangoes and cashews while hiding from simple sightings from predators. When the baron showed off his great invisible work, the monkey slag caterpillar (Phobetron perithecium) really said, “Hold my beer” for fear hanging and to dress likes a tarantula. The larvae themselves are not dangerous; they feed on most trees and shrubs and do not sting their hair despite widespread misconceptions (as opposed to this walking-hat for caterpillars). The amazingly sized and strange creature, unfortunately, left out of the ugly breath effect, as after pupation it evolved into a hug moth that looked like a fluffy turd.