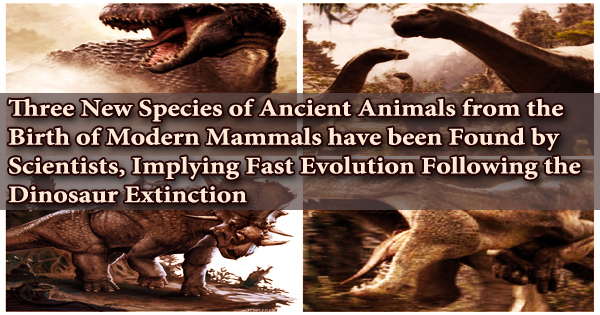 Three New Species of Ancient Animals from the Birth of Modern Mammals have been Found by Scientists, Implying Fast Evolution Following the Dinosaur Extinction

The discovery of three new species of ancient animals from the birth of modern mammals is described in a study published today (18th August 2021) in the peer-reviewed Journal of Systematic Palaeontology, and it suggests fast development shortly after the catastrophic extinction of the dinosaurs. These prehistoric animals populated North America during the early Paleocene Epoch, just a few hundred thousand years before the dinosaurs were wiped out by the Cretaceous-Paleogene boundary. Their discovery shows that mammals diversified more quickly than previously assumed following the catastrophic extinction.

Dinosaurs ruled the Earth for at least 230 million years, according to abundant fossil bones, teeth, trackways, and other physical evidence. However, no indication of dinosaur bones has yet been discovered in strata younger than 66 million years. As the Cretaceous epoch gave way to the Paleogene, it appears that all nonavian dinosaurs abruptly vanished.

Miniconus jeanninae, Conacodon hettingeri, and Beornus honeyi are three new species to science. They range in size from a mouse to a rat, significantly larger than the primarily mouse to rat-sized mammals that lived alongside the dinosaurs in North America before it.

Each has its own set of distinguishing dental characteristics. Due to the look of the inflated (puffy) molars, Beornus honeyi was named in honor of The Hobbit character Beorn (cheek teeth).

The new species is part of a complex group of placental mammals known as archaic ungulates (or condylarths), which are the ancestral forerunners of today’s hoofed mammals (eg, horses, elephants, cows, hippos). Paleontologists at the University of Colorado in Boulder discovered lower jaw bone and tooth fragments that reveal information about the animals’ identity, habits, and body size.

Across most of the world, ancient woods appear to have died away. While some animals, birds, tiny reptiles, fish, and amphibians managed to survive, the variety of the surviving living forms plummeted. This great extinction catastrophe wiped out three-quarters of the world’s population.

The three new species are members of the Periptychidae family, which are differentiated from other ‘condylarths’ by their enlarged premolars and unique vertical enamel ridges on their teeth. Researchers assume they were omnivores because they evolved teeth that enabled them to crush both plants and meat, but this does not rule out the possibility that they were strictly herbivores.

Because many kinds of mammals appeared for the first time shortly after the catastrophic extinction that wiped out the non-avian dinosaurs 66 million years ago, it is often regarded as the commencement of the ‘Age of Mammals.’

As lead author, Madelaine Atteberry from the University of Colorado Geological Sciences Department in the USA explains, “When the dinosaurs went extinct, access to different foods and environments enabled mammals to flourish and diversify rapidly in their tooth anatomy and evolve larger body size. They definitely took advantage of this opportunity, as evidenced by the rapid emergence of new animal species following the mass extinction.”

Atteberry and co-author Jaelyn Eberle, a curator at the Museum of Natural History and a professor of geological sciences at the University of Colorado, examined the teeth and lower jaw bones of 29 fossil ‘condylarth’ species to determine anatomical differences and used phylogenetic techniques to figure out how the species are related to one another and to other early Paleocene species.

The evidence points to these three new species being discovered by science. Beornus honeyi was the largest, about the size of a marmot or house cat; Conacodon hettingeri is similar to other Conacodon species but differs in the morphology of its last molar; and Miniconus jeanninae is similar in size to other small, early Paleocene ‘condylarths,’ but is distinguished by a tiny cusp on its molars called a parastylid

“Previous studies suggest that in the first few hundred thousand years after the dinosaur extinction (what is known in North America as the early Puercan) there was relatively low mammal species diversity across the Western Interior of North America, but the discovery of three new species in the Great Divide Basin suggests rapid diversification following the extinction,” says Atteberry.

“These new periptychid ‘condylarths’ account for only a small portion of the site’s more than 420 mammalian remains. We haven’t fully recorded the richness of animal diversity in the early Paleocene, and numerous more new species are expected to be discovered.”