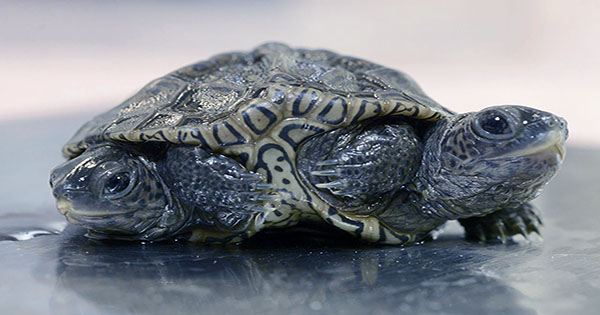 It’s a fantastic deal to get two for the price of one, but it’s a little more tricky when it comes to heads. The unusual shell configuration is not proving to be an issue for Mary-Kate and Ashley, bicephalic diamondback terrapin twins taken in by New England Wildlife Centers. Mary-Kate and Ashley were born in a protected nesting site in Barnstable, Massachusetts, but were promptly identified as one of a kind and taken to the NEWC. They have bicephaly, which is a rare but not unheard-of condition in both animals and people. It can cause by environmental or genetic variables that influence the development of an embryo, causing deviations from the standard body design.

It resulted in two heads and six legs in the instance of these terrapin twins. The shell roommates appear to have some shared and autonomous anatomy, similar to conjoined human twins. The NEWC expects that after a CT scan, which was kindly provided free of charge to Mary-Kate and Ashley by the VCA South Shore Veterinary Practice in Weymouth, Massachusetts, the specific facts of this will become clearer.

The duo arrived at the hospital alert and active on both sides and their progress has astounded the vets despite their unconventional lifestyle. “What’s more shocking is that they both appear to be doing well!” New England Wildlife Centers’ Chairman of the Board of Directors and Director of Educational and Medical Programs, Greg Mertz DVM, told IFLScience. “After a week or so, most two-headed reptiles sag. Bicephaly is an uncommon condition caused by a combination of hereditary and environmental factors. Snakes demonstrate it more frequently than turtles, in my 30 years of treating reptiles. It’s uncommon; out of thousands of reptiles studied, I’ve only seen it three or four times.”

The two have been eating, swimming, and, most importantly, gaining weight every day during their time at the NEWC. Given their proficiency in navigating their environment, it appears that the two minds can operate together, which is not usually the case with bicephalic creatures. Bicephalic snake twins discovered in Florida last year found themselves at odds with each other, as their two heads had separate brains that frequently disagreed. The conjoined animals could not get around because of the conflict of interests; therefore, they could not release into the wild since they would not survive.

According to a statement on the NEWC Facebook page, x-rays indicated that Mary-Kate and Ashley have two spines that merge further down the body, resulting in a 50/50 split in who controls the six legs. They shared a yolk sac after hatching, but a barium testing indicated they have independent digestive systems after their gastrointestinal tracts were up and running. The CT scan expected to reveal more about the structure of their internal organs, although they already appear to be Two-of-a-Kind.