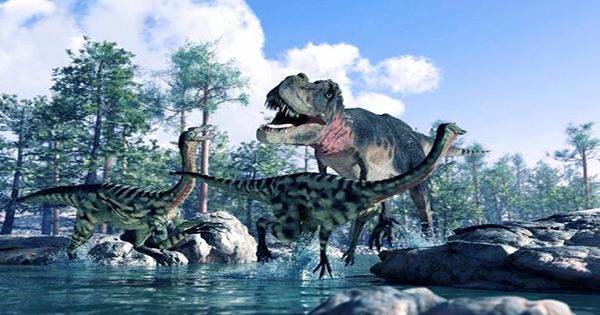 In the course of less than two million years, the Earth underwent four spurts of volcanic activity, beginning around 234 million years ago. The warming these induced favored early dinosaurs compared to their competitors, helping to push them towards the planetary dominance that lasted more than 150 million years, researchers have concluded. Midway through the Triassic, sediments from the Jiyuan Basin give a record of climate variations in what is now northern China. According to a study published in the Proceedings of the National Academy of Sciences, rising temperatures accompanied by rising mercury levels. With no industrialisation to disseminate heavy metal, volcanoes were the only source of such mercury.

“The world’s animal and plant life underwent dramatic changes over the course of two million years, including selective extinctions in the sea domain and diversification of plant and animal groupings on land. In a statement, study co-author Professor Jason Hilton of the University of Birmingham noted, “These episodes overlap with a spectacular interval of high rainfall known as the Carnian Pluvial Episode.” The Carnian Pluvial Episode has been well documented through sedimentation on land and in the sea, but this work at Jiyuan has revealed that there were four episodes, each driven by discrete pulses of powerful volcanic activity associated with enormous carbon dioxide releases into the atmosphere, according to Hilton. “As a result, global temperature and humidity increased.”

Increased rainfall was a global rather than local phenomenon, according to geological data from regions as far apart as Central Europe, Greenland, Morocco, and Argentina.

Before the Carnian Pluvial Episode, dinosaurs had only recently begun to diversify, but they took advantage of the newly warm and humid environment to spread to previously unthinkable levels. They were not the only ones who came out on top. “This amazing epoch in Earth history was also significant for the birth of contemporary conifer families and had a profound impact on the evolution of terrestrial ecosystems, animal and plant life, including ferns, crocodiles, turtles, insects, and the first mammals,” according to the researchers. Hilton remarked.

The Wrangellia Large Igneous Province, located off the coast of what is now western Canada, formed about the same time and was thought to be the source of the volcanism. Although the report cannot corroborate this, the authors believe that it is likely. It may appear that these changes in global temperatures happened overnight, yet it took thousands or tens of thousands of years for temperatures to rise by 4-8 degrees Celsius (7-15 degrees Fahrenheit). Although the total increase now is smaller, the rate is significantly faster. Regardless, the dinosaurs will not resurrect.