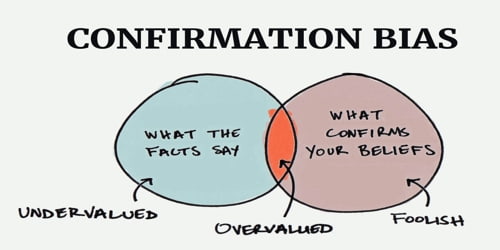 Confirmation bias, the tendency to process information by looking for, or interpreting, information that is consistent with one’s existing beliefs. It is also called confirmatory bias or myside bias. This biased approach to decision making is largely unintentional and often results in ignoring inconsistent information. Existing beliefs can include one’s expectations in a given situation and predictions about a particular outcome. People are especially likely to process information to support their own beliefs when the issue is highly important or self-relevant. Confirmation bias is a variation of the more general tendency of apophenia.

For example: Confirmation bias is commonly seen around the election time when people from all walks of life are in favor of a specific party or an individual who they think is fit to win. When they are asked why they like a particular party such as ABC, they would bring out all the positive information they have about the party or individual.

Confirmation bias can also be found in anxious individuals, who view the world as dangerous. For example, a person with low self-esteem is highly sensitive to being ignored by other people, and they constantly monitor for signs that people might not like them.

Confirmation bias is one example of how humans sometimes process information in an illogical, biased manner. Many factors of which people are unaware can influence information processing. Philosophers note that humans have difficulty processing information in a rational, unbiased manner once they have developed an opinion about the issue. Humans are better able to rationally process information, giving equal weight to multiple viewpoints, if they are emotionally distant from the issue (although a low level of confirmation bias can still occur when an individual has no vested interests).

Confirmation biases are effects in information processing. They differ from what is sometimes called the behavioral confirmation effect, commonly known as a self-fulfilling prophecy, in which a person’s expectations influence their own behavior, bringing about the expected result.

Confirmation bias is strong and widespread, occurring in several contexts. In the context of decision making, once an individual makes a decision, he or she will look for information that supports it. It also surfaces in people’s tendency to look for positive instances. When seeking information to support their hypotheses or expectations, people tend to look for positive evidence that confirms that a hypothesis is true rather than information that would prove the view is false if it is false.

Confirmation bias is often described as a result of automatic, unintentional strategies rather than deliberate deception. According to Robert MacCoun, most biased evidence processing occurs through a combination of both “cold” (cognitive) and “hot” (motivated) mechanisms.

Cognitive explanations for confirmation bias are based on limitations in people’s ability to handle complex tasks, and the shortcuts, called heuristics, that they use.

Confirmation bias is important because it may lead people to hold strongly to false beliefs or to give more weight to information that supports their beliefs than is warranted by the evidence. People may be overconfident in their beliefs because they have accumulated evidence to support them, when in reality much evidence refuting their beliefs was overlooked or ignored, evidence which, if considered, would lead to less confidence in one’s beliefs. These factors may lead to risky decision making and lead people to overlook warning signs and other important information.