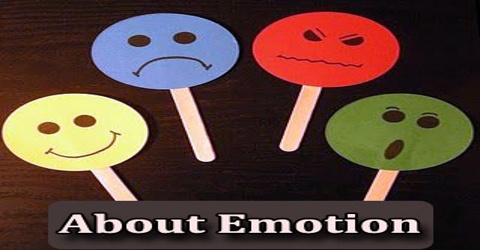 Emotion is a complex psychological state that involves three distinct components: a subjective experience, a physiological response, and a behavioral or expressive response. Emotion is often intertwined with mood, temperament, personality, disposition, and motivation. In some theories, cognition is an important aspect of emotion. Historically, people spoke not of emotions but of passions. The passions encompass, or encompassed, not only the emotions, but also pleasure, pain, and desire. An emotion is normally quite short-lived, but intense. Emotions are also likely to have a definite and identifiable cause. For example, after disagreeing with a friend over politics, people might feel angry for a short period of time. A mood, on the other hand, is usually much milder than an emotion, but longer-lasting. In many cases, it can be difficult to identify the specific cause of a mood. For example, peoplke might find themselfs feeling gloomy for several days without any clear, identifiable reason.

Emotions can be defined as a positive or negative experience that is associated with a particular pattern of physiological activity. The Subjective Experience – While experts believe that there are a number of basic universal emotions that are experienced by people all over the world regardless of background or culture, researchers also believe that experiencing emotion can be highly subjective. Mixed emotions over different events or situations in our lives are common. When faced with starting a new job, people might feel both excited and nervous. Getting married or having a child might be marked by a wide variety of emotions ranging from joy to anxiety. These emotions might occur simultaneously, or people might feel them one after another.

The Physiological Response – If people havee ever felt their stomach lurch from anxiety or their heart palpate with fear, then theyu realize that emotions also cause strong physiological reactions. Many of the physical reactions people experience during an emotion, such as sweating palms, racing heartbeat, or rapid breathing are controlled by the sympathetic nervous system, a branch of the autonomic nervous system.

The Behavioral Response – The final component is perhaps one that people are most familiar with the actual expression of emotion. Researchers believe that many expressions are universal, such as a smile indicating happiness or pleasure or a frown indicating sadness or displeasure. Cultural rules also play an important role in how we express and interpret emotions. In Japan, for example, people tend to mask displays of fear or disgust when the authority figure is present.

“Emotions” wrote Aristotle (384–322 bce), “are all those feelings that so change men as to affect their judgements, and that are also attended by pain or pleasure. Such are anger, pity, fear and the like, with their opposites.” Emotion is indeed a heterogeneous category that encompasses a wide variety of important psychological phenomena. Emotions produce different physiological, behavioral and cognitive changes. The original role of emotions was to motivate adaptive behaviors that in the past would have contributed to the survival of humans. Emotions are responses to significant internal and external events. Some emotions are very specific, insofar as they concern a particular person, object, or situation. Others, such as distress, joy, or depression, are very general. Some emotions are very brief and barely conscious.

An emotion may have pronounced physical accompaniments, such as a facial expression, or it may be invisible to observers. It may involve conscious experience and reflection, as when one “wallows” in it, or it may pass virtually unnoticed and unacknowledged by the subject. An emotion may be profound, in the sense that it is essential to one’s physical survival or mental health, or it may be trivial or dysfunctional. It also may be socially appropriate or inappropriate. It may even be socially obligatory; e.g., feeling remorse after committing a crime or feeling grief at a funeral.