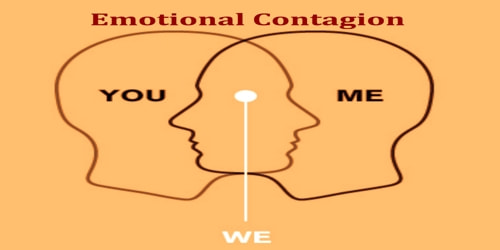 Emotional contagion is a term that describes the fact that we take on the moods and attitudes of those around us. While people generally don’t act exactly identical to those around them, moods of surrounding people can rub off on us. One view developed by Elaine Hatfield, et al., is that this can be done through automatic mimicry and synchronization of one’s expressions, vocalizations, postures and movements with those of another person. When people unconsciously mirror their companions’ expressions of emotion, they come to feel reflections of those companions’ emotions. Emotions can be shared across individuals in many different ways both implicitly or explicitly.

A study looked at people who had reduced emotional content on their news feeds and found that when positive expressions were reduced, people produced fewer positive posts and more negative ones; when negative emotions were reduced, the opposite occurred.

A study in Psychological Science found that a mom’s stressful experiences are contagious to her infant and that members of close pairs, like mothers and infants, can reciprocally influence each other’s physiological reactivity. In other words, their emotions are contagious to one another.

The phrase “emotional contagion” embodies the idea that humans synchronize their own emotions with the emotions expressed by those around them, whether consciously or unconsciously. In a 1993 paper, Psychologists Elaine Hatfield, John Cacioppo, and Richard Rapson define it as “the tendency to automatically mimic and synchronize expressions, vocalizations, postures, and movements with those of another person’s and, consequently, to converge emotionally”.

Context and Function: Emotional contagion may occur between two persons but also in larger groups. Emotions are, in large part, elicited because people catch each other’s emotions: People are sad, elated, frightened, or angry because they see others in their immediate surroundings experiencing these emotions.

The most important function of emotional contagion is that it smoothens social interactions and facilitates mutual involvement and emotional closeness because it helps to synchronize and coordinate the interaction.

Influencing factors: There are several factors that determine the rate and extent of emotional convergence in a group. Some of these are: membership stability, mood-regulation norms, task interdependence, and social interdependence. Besides these event-structure properties, there are personal properties of the group’s members, such as openness to receive and transmit feelings, demographic characteristics and dispositional affect that influence the intensity of emotional contagion.

Types of Emotional Contagion: Emotions can be shared and mimicked in many different ways. Early investigators of emotional contagion believed that “conscious reasoning, analysis, and imagination accounted for this phenomenon.” However, it is known now that some forms of emotional contagion are more subtle and automatic than early theorists suggested.

Emotional Contagion Implications: Emotional contagion may explain specific group behaviors, as well as the emotional development of interpersonal relations. Most research has focused on automatic mimicry, testing this phenomenon in different contexts and with various nonverbal behaviors. However, the phenomenon is still rather unexplored and needs further examination, in particular with respect to the conditions under which it occurs.