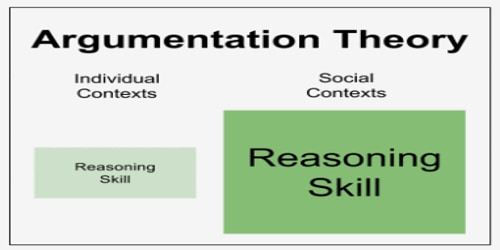 Argumentation is a vital factor for communication and it endured in our society for centuries. This includes deliberation and negotiation which are concerned with collaborative decision-making procedures. It also encompasses eristic dialog, the branch of social debate in which victory over an opponent is the primary goal.

Argumentation theory (or argumentation) is the interdisciplinary study of how conclusions can be reached through logical reasoning; that is, claims based, soundly or not, on premises. It includes the arts and sciences of civil debate, dialogue, conversation, and persuasion. It studies rules of inference, logic, and procedural rules in both artificial and real-world settings.

These theories which were put forward by Aristotle were rejected and were questioned by the scholars. They found a broader premise for argument than the formal philosophical systems. During 1960-1970 several scientists such as Mr. Perelman tried to develop the techniques used by the people to get the support of others for their views and opinions. Likewise, many scientists and authors have developed argumentation in different ways. Stephen Toulmin an English philosopher and logician have come up with the elements of arguments which generate categories through which it can be evaluated.

Argumentation theory had its origins in foundationalism, a theory of knowledge (epistemology) in the field of philosophy. It sought to find the grounds for claims in the forms (logic) and materials (factual laws) of a universal system of knowledge. But for argument scholars gradually rejected Aristotle’s systematic philosophy and the idealism in Plato and Kant. They questioned and ultimately discarded the idea that argument premises take their soundness from formal philosophical systems. The field thus broadened.