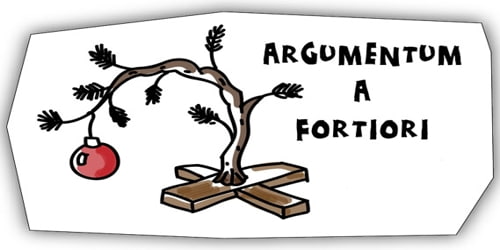 “If ye then, being evil, know how to give good gifts unto your children, how much more shall your Father which is in heaven give good things to them that ask him?” — Matthew 7:11

In the English language, the phrase a fortiori is most often used as an adverbial phrase meaning “by even greater force of logic” or “all the more so”.

Bryan A. Garner has written in Garner’s Modern American Usage that writers sometimes use a fortiori as an adjective, which he says is “a usage to be resisted.” As an example of this he gives the sentence, “Clearly if laws depend so heavily on public acquiescence, the case of conventions is a fortiori one.”

A fortiori arguments are regularly used in Jewish law under the name Kal va-chomer, literally “mild and severe”, the mild case being the one we know about while trying to infer about the more severe case.

The term a fortiori is sometimes used in legal writing to say that an argument being made has already been expressed from an even stronger position. For instance, the writer may state that, because a particular fact is true, the court can infer that his own argument, or second fact, is also true.

A fortiori argument is applied by following the logic that a point to be proved is followed by a stronger claim. This principle is applied in situations where:

There are mainly two types of a fortiori argument. They are: