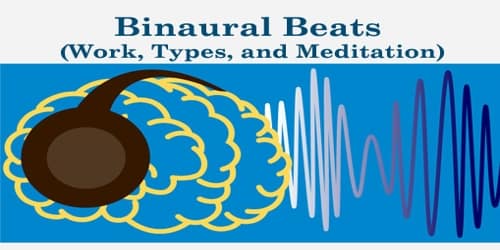 Definition: “Binaural beats” are specific kinds of sound that can shape our brain activity to boost our concentration, enhance our creativity, and improve our mood. A binaural beat is an auditory illusion perceived when two different pure-tone sine waves, both with frequencies lower than 1500 Hz, with less than a 40 Hz difference between them, are presented to a listener dichotically (one through each ear).

The way binaural beats work was first discovered in 1839 by a Prussian physicist and meteorologist named Heinrich Wilhelm Dove.

It wasn’t until 1973, though, that biophysicist Doctor Gerald Oster brought the technology into mainstream awareness in a paper called ‘Auditory Beats in the Brain’ (Scientific American, 1973). In his paper, Oster concluded;

It is possible that hormonally induced physiological behavior changes may be made apparent by measuring the binaural-beat spectrum.

Forty-five years on, and a heap of research by scientists and sound engineers later, the science of binaural beats (brainwave entrainment) is used by people all over the world to entrain the brain into different states that contribute to stress relief, focus, aiding sleep, pain relief and much more.

Binaural-beat perception originates in the inferior colliculus of the midbrain and the superior olivary complex of the brainstem, where auditory signals from each ear are integrated and precipitate electrical impulses along neural pathways through the reticular formation up the midbrain to the thalamus, auditory cortex, and other cortical regions. How Does It Work?

When signals of two different frequencies (sounds) are presented, one to each ear, the brain detects phase differences between these signals. The brain processes this anomalous information differently when these phase differences are heard with stereo headphones or speakers. A perceptual integration of the two signals in perceived in the brain, producing the sensation of a third “beat”. The difference between the signals waxes and wanes (this is the “wavy” sound heard in the hypnotic sessions) as the two stereo sounds mesh in and out of phase. The binaural beat is perceived as a fluctuating rhythm at the frequency of the difference between the two auditory inputs.

For example: if a 200 Hz sound frequency is sent to the left ear, and a 205 Hz to the right ear, the brain will process those two frequencies and perceive a new frequency at 5 Hz.

The brain then follows along at the new frequency (5 Hz), producing brainwaves at the same rate of Hertz (Hz). The technical term for this process is ‘frequency following response’. The 5 Binaural Beats Brainwave States: The neurons in our brains use electrical signals to create our thoughts, emotions, and behaviors. When large numbers of neurons fire together with the same rhythm (“synchronize”), this creates brain waves. Brain waves can be measured with the use of electrodes on the scalp to record electrical signals, a technique called electroencephalography (EEG).

There are 5 major categories of brain waves, each associated with different mental functions:

It is important to remember that at any given time, there are varying levels of each of these brainwave patterns occurring in our brain.

However, there are three main reasons as to why this name has been adopted:

Rather Binaural Beats is perceived as an auditory beat and theoretically is being used coach certain brain rhythms from what is called the frequency-following response (the tendency for the brain to resonate at the frequency of an external stimulus).