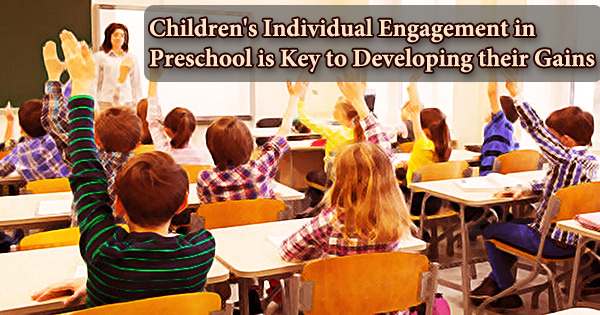 Positive teacher engagement was linked to improvements in compliance and executive function, whereas active task engagement was linked to improvements in emotion regulation over the course of the year. Many treatments and programs aimed at improving the lives of low-income children emphasize the need for high-quality early childhood education. Emotionally supportive, well-organized, and cognitively challenging preschool classes can aid in children’s learning and growth. However, concentrating on the quality of early childhood education has mostly focused on instructors, overlooking the critical role that children play in their own development.

Children’s increases in task orientation and decreases in dysregulation were aided by good interactions with instructors or peers. Even after taking into account disparities in classroom quality, a new study revealed that children’s individual involvement with instructors, classmates, and tasks was essential to the improvements they achieved over the preschool year. Observing how a child interacts with classmates, instructors, and learning activities in a preschool classroom has the potential to inform the development of professional development targeted at assisting teachers in promoting individual children’s development within the early education setting.

The study was published in the journal Child Development by researchers from Northwestern University, Montana State University Billings, and the University of Virginia.

“Children can have very different experiences in the same classroom and their individual engagement is associated with their learning gains above and beyond the average quality of classroom instruction,” explains Terri J. Sabol, assistant professor of human development and social policy at Northwestern University, who led the study. “It’s important to go beyond general classroom excellence and record each child’s unique experiences in the classroom.”

The researchers studied 211 low-income, racially and culturally diverse 4-year-olds in 49 state and federally sponsored preschool classrooms. Researchers observed the children’s good and negative interactions with instructors, peers, and work in the classroom to determine their level of involvement (e.g., their ability to communicate with teachers, sociability and assertiveness with peers, self-reliance in tasks, conflicts with teachers and peers).

In the fall and spring of their preschool year, children were tested on measures of school preparation, as well as the quality of the classroom setting (e.g., classroom climate, teachers’ sensitivity, emotional support, and classroom organization). The majority of prior research has focused on either the impact of classroom interactions or the role of individual children’s involvement in the classroom on student results; however, this study looked at both.

“To truly understand and support individual children’s development, it is vital that we have observational tools that capture individual children’s engagement and the overall classroom context,” notes Natalie Bohlmann, associate professor of education at Montana State University Billings, who collaborated on the study.

Even after accounting for emotional support, classroom structure, and instructional assistance at the classroom level, the study revealed that children’s individual involvement was connected to their developmental improvements. Good interaction with instructors was linked to increased reading skills, whereas positive engagement with peers was linked to enhanced language and self-regulatory abilities. Furthermore, their favorable attitude about tasks was linked to better ties with teachers.

The study discovered that children who were adversely engaged in the classroom (e.g., those who had disputes with instructors or classmates) were at a disadvantage in terms of school preparation. Nearly all of the academic, language, and social outcomes evaluated were worse in children with higher levels of negative engagement, including weaker language, literacy, and self-regulatory abilities.

“Interventions designed to prepare children for school should include a focus on children’s individual behaviors in the classroom,” adds Jason Downer, associate professor of education at the University of Virginia, who was the lead investigator. “Observing children’s involvement can help educators implement more effective customized techniques in the classroom by guiding decisions about where, when, and how to intervene with at-risk children.”