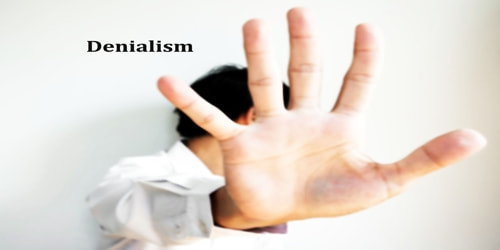 Denialism is the employment of rhetorical tactics to give the appearance of argument or legitimate debate when in actuality there is none. In the psychology of human behavior, denialism is a person’s choice to deny reality, as a way to avoid a psychologically uncomfortable truth. In the sciences, denialism is the rejection of basic facts and concepts that are undisputed, well-supported parts of the scientific consensus on a subject, in favor of radical and controversial ideas.

Denialism isn’t about name-calling or the psychological coping mechanism of denial. The first reaction of any denialist to being labeled such is to merely reply, “You’re the denialist” or to redefine the terms so that it excludes them. However, denialism is about tactics that are used to frustrate legitimate discussion, it is not about simply name-calling. It’s about how you engage in a debate when you have no data.

Anthropologist Didier Fassin distinguishes between denial, defined as “the empirical observation that reality and truth are being denied”, and denialism, which he defines as “an ideological position whereby one systematically reacts by refusing reality and truth”.

Edward Skidelsky, a lecturer in philosophy at Exeter University, has suggested that this is a new use for the word denial and it may have its origins in an old sense of “deny”, akin to “disown” (as in the Apostle Peter denying Jesus), but that its more immediate antecedence is from the Freudian sense of deny as a refusal to accept a painful or humiliating truth. He suggests that, by the introduction of the denier tag into further areas of historical and scientific debate, “One of the great achievements of The Enlightenment—the liberation of historical and scientific inquiry from dogma—is quietly being reversed”, and that this should worry liberal-minded people. 5 general tactics are used by denialists to sow confusion. They are a conspiracy, selectivity (cherry-picking), fake experts, impossible expectations (also known as moving goalposts), and general fallacies of logic.

In some cases, denialism exploits genuine concerns, such as the rejection of evidence on the nature of AIDS by African-Americans who perceive them as a manifestation of racist agendas.7 While conspiracy theories cannot simply be dismissed because conspiracies do occur,8 it beggars belief that they can encompass entire scientific communities.

Religious beliefs may prompt an individual to deny the validity of the scientific theory of evolution. Evolution is still considered an undisputed fact within the scientific community and in academia, where the level of support for evolution is essentially universal, yet this view is often met with opposition by biblical literalists.

Denialists are usually not deterred by the extreme isolation of their theories, but rather see it as the indication of their intellectual courage against the dominant orthodoxy and the accompanying political correctness, often comparing themselves to Galileo.