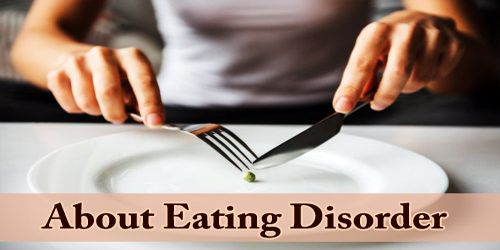 An eating disorder is a mental disorder; it is when we have an unhealthy attitude to food, which can take over our lives and make us ill. It can involve eating too much or too little or becoming obsessed with our weight and body shape.

People with anorexia nervosa and bulimia nervosa tend to be perfectionists with low self-esteem and are extremely critical of themselves and their bodies. They usually “feel fat” and see themselves as overweight, sometimes even despite life-threatening semi-starvation (or malnutrition). Intense fear of gaining weight and of being fat may become all-pervasive. In the early stages of these disorders, patients often deny that they have a problem.

The causes of eating disorders are not clear, although both biological and environmental factors appear to play a role. Eating disorders affect about 12 percent of dancers. Cultural idealization of thinness is believed to contribute to some eating disorders. Individuals who have experienced sexual abuse are also more likely to develop eating disorders. Some disorders such as pica and rumination disorder occur more often in people with intellectual disabilities. Only one eating disorder can be diagnosed at a given time. Men and women of any age can get an eating disorder, but they most commonly affect young women aged 13 to 17 years old.

In many cases, eating disorders occur together with other psychiatric disorders like anxiety, panic, obsessive-compulsive disorder, and alcohol, and drug abuse problems. New evidence suggests that heredity may play a part in why certain people develop eating disorders, but these disorders also afflict many people who have no prior family history. Without treatment of both the emotional and physical symptoms of these disorders, malnutrition, heart problems, and other potentially fatal conditions can result. However, with proper medical care, those with eating disorders can resume suitable eating habits, and return to better emotional and psychological health.

The most common eating disorders are:

Treatment can be effective for many eating disorders. Treatment varies by disorder and may involve counseling, dietary advice, reducing excessive exercise, and the reduction of efforts to eliminate food. Medications may be used to help with some of the associated symptoms. Hospitalization may be needed in more serious cases. About 70% of people with anorexia and 50% of people with bulimia recover within five years. Recovery from binge eating disorder is less clear and estimated at 20% to 60%. Both anorexia and bulimia increase the risk of death.