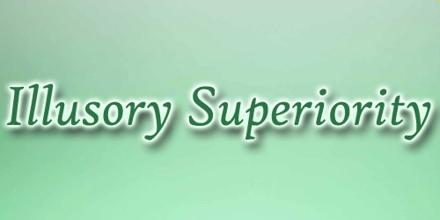 Illusory Superiority is a phenomenon where people regard themselves as generally better than others, no matter what the facts are. It is evident in a variety of areas including intelligence, performance on tasks or tests, and the possession of desirable characteristics or personality traits. It is a cognitive bias that causes people to overestimate their positive qualities and abilities and to underestimate their negative qualities, relative to others. It is often referred to as the above average effect. Illusory Superiority to be demonstrated by social comparison, two logical hurdles have to be overcome.