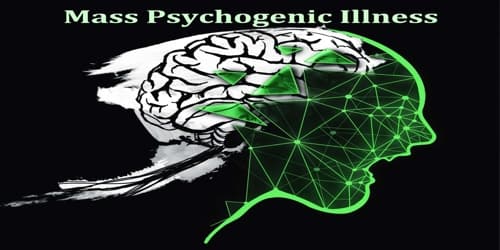 Mass psychogenic illness (MPI) is when people in a group start feeling sick at the same time even though there is no physical or environmental reason for them to be sick. It is also called mass sociogenic illness or just sociogenic illness. People could think they’ve been exposed to something dangerous, like a germ or a toxin (poison). This could happen to a class in a school or workers in an office. MPI is distinct from other collective delusions, also included under the blanket term mass hysteria, in that MPI causes symptoms of the disease, though there is no organic cause.

Mass psychogenic illness has occurred for hundreds of years. It has happened all around the world and in many different social settings. No one keeps track of these outbreaks. But they are probably a lot more common than we realize.

“It has been argued whether this is a subcategory of conversion disorder. There has been some discussion of whether some of this is … factitious or malingering. I would argue that it does not really matter,” said Dr. Mink, Professor of Pediatric Neurology at the University of Rochester in New York. “What matters is that we understand that this is an entity. Exactly why it occurs may not be relevant to treatment.”

Causes and Symptoms of MPI: Many outbreaks of mass psychogenic illness start with an environmental “trigger,” like a bad smell or a rumor of exposure to a poison. When one person gets sick, others in the group also start feeling sick. The first person who got sick might have had a real illness, but it might not have been related to the “trigger.”

Qualities of MPI outbreaks often include:

Also, the illness may recur after the initial outbreak.

The symptoms of mass psychogenic illness depend on what sickness people believe they’ve been exposed to. Some symptoms they could experience include:

Diagnosis, Treatment, and Prevention of MPI: Psychogenic illness can affect normal, healthy people. Just because people reacted this way to the threat of something dangerous does not mean there is something wrong with their mind.

The following might indicate that a group sickness is caused by mass psychogenic illness:

When treating patients with mass psychogenic illness, “First of all, you have to be an ally of your patient and not challenge the veracity,” Dr. Mink said.

“For mass psychogenic illness, reducing attention from social media groups and perhaps finding a way to disrupt the social cohesiveness of that group, at least until the symptoms can improve,” may be beneficial, he said. “Regular follow-up is helpful for all conversion disorders…. You do not want the patient to have to get worse to be able to see their doctor.”

The signs of illness tend to go away once people are examined and doctors find that they do not have a dangerous illness. It is important to keep the people who feel sick away from the commotion and stress of the outbreak.

It is unclear how mass psychogenic illness can be prevented. You might think you are involved in an outbreak but you aren’t showing any signs yet. In this case, it might help to remove yourself from the situation. This could prevent you from developing symptoms.