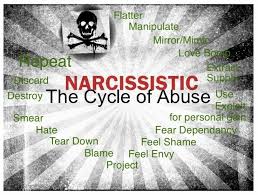 Narcissistic Abuse is the term has grown into used more widely to reference forms of punishment in adult relationships for the narcissist. Narcissistic abuse is a term that emerged from the late twentieth century, and became more prominent from the early 21st century with the works of Alice Miller and other Neo-Freudians, rejecting psychoanalysis as being just like poisonous pedagogies.