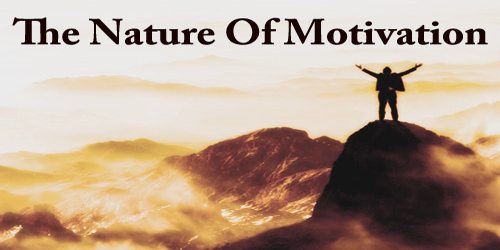 The Nature Of Motivation

Motivation concerns energy, direction, persistence, and equifinality in all aspects of activation and intention. Motivation has been a central and perennial issue in the field of psychology, for it is at the core of biological, cognitive, and social regulation. Perhaps more important, in the real world, motivation is highly valued because of its consequences: Motivation produces. It is therefore of preeminent concern to those in roles such as manager, teacher, religious leader, coach, health care provider, and parent that involve mobilizing others to act.

Although motivation is often treated as a singular construct, even superficial reflection suggests that people are moved to act by very different types of factors, with highly varied experiences and consequences. People can be motivated because they value activity or because there is strong external coercion. They can be urged into action by an abiding interest or by a bribe. They can behave from a sense of personal commitment to excel or from fear of being surveilled. These contrasts between cases of having internal motivation versus being externally pressured are surely familiar to everyone. The issue of whether people stand behind a behavior out of their interests and values, or do it for reasons external to the self, is a matter of significance in every culture and represents a basic dimension by which people make sense of their own and others’ behavior.

White and deCharms proposed that the need for competence and autonomy is the basis of intrinsic motivation and behavior. This is a link between people’s basic needs and their motivations.

Situations that give autonomy as opposed to taking it away also have a similar link to motivation. Studies looking at choice have found that increasing a participant’s options and choices increase their intrinsic motivation.

Vallerand and Reid found negative feedback has the opposite effect (i.e., decreasing intrinsic motivation by taking away from people’s need for competence).

Relatedness – During a study on the relationship between infants’ attachment styles, their exhibition of mastery-oriented behavior, and their effect during play, Frodi, Bridges, and Grolnick failed to find significant effects: “Perhaps somewhat surprising was the finding that the quality of attachment assessed at 12 months failed to significantly predict either mastery motivation, competence, or effect 8 months later when other investigators have demonstrated an association between similar constructs…” Yet they note that larger sample sizes could be able to uncover such effects: “A comparison of the secure/stable and the insecure/stable groups, however, did suggest that the secure/stable group was superior to the insecure/stable groups on all mastery-related measures. Obviously, replications of all the attachment-motivation relations are needed with different and larger samples.”

Comparisons between people whose motivation is authentic (literally, self-authored or endorsed) and those who are merely externally controlled for an action typically reveal that the former, relative to the latter, have more interest, excitement, and confidence, which in turn is manifest both as enhanced performance, persistence, and creativity and as heightened vitality, self-esteem, and general well-being. This is so even when the people have the same level of perceived competence or self-efficacy for the activity.

Because of the functional and experiential differences between self-motivation and external regulation, a major focus of Self-determination theory (SDT) has been to supply a more differentiated approach to motivation, by asking what kind of motivation is being exhibited at any given time. By considering the perceived forces that move a person to act, SDT has been able to identify several distinct types of motivation, each of which has specifiable consequences for learning, performance, personal experience, and well-being. Also, by articulating a set of principles concerning how each type of motivation is developed and sustained, or forestalled and undermined, SDT at once recognizes a positive thrust to human nature and provides an account of passivity, alienation, and psychopathology.