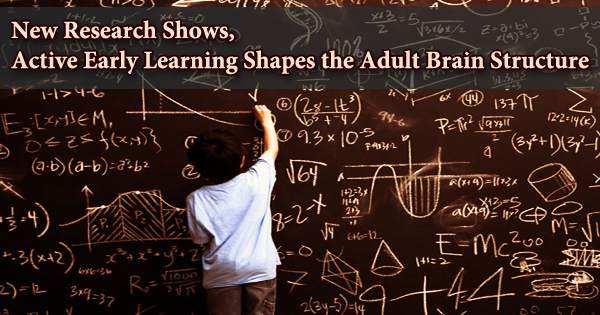 Low socioeconomic status infants were randomized to either five years of cognitively and linguistically stimulating center-based care or a control condition in a new study published in the Journal of Cognitive Neuroscience; the intervention resulted in large and statistically significant changes in brain structure measured in midlife, particularly for males. Observational studies of such discrepancies are common, leaving the question of causality unanswered. Animal studies, on the other hand, have shown that environmental stimulation has a causal effect on brain development by randomly assigning animals to low- or high-complexity physical settings.

Starting at six weeks of age, the researchers employed structural brain imaging to determine the developmental impacts of linguistic and cognitive stimulation in babies. An enriched environment’s effect on brain structure has previously been proven in animal research, but this is the first experimental study to reveal a similar outcome in humans. The influence of distinctively human elements of the environment, such as language and cognitive stimulation, on brain development, is a fundamental topic for neuroscience, and a big unresolved question concerns the impact of these particular human features of the environment.

While research on big animals demonstrates that more complex cage settings result in microscopic and macroscopic brain changes, including a larger cortex, such manipulations give an inadequate model for the contextual variations that matter most in human development. Differences in sophisticated kinds of cognitive and linguistic experience are among them.

“Our research shows a relationship between brain structure and five years of high-quality, educational, and social experiences,” said Craig Ramey, professor and distinguished research scholar with Fralin Biomedical Research Institute at VTC and principal investigator of the study. “We’ve shown that among vulnerable youngsters who had engaging and emotionally supportive learning experiences, statistically, significant changes in brain structure emerge as they get older.”

According to Martha Farah, director of Penn’s Center for Neuroscience & Society and the study’s first author, the findings “confirm the concept that early environment impacts the brain development of individuals growing up with multirisk socioeconomic problems.” “This has exciting implications for the basic science of brain development, as well as for theories of social stratification and social policy,” Farah said.

The research follows children who have been a part of the Abecedarian Project, an early intervention program founded by Ramey in Chapel Hill, North Carolina, in 1971 to investigate the impact of educational, social, health, and family support services on high-risk newborns. Initially, the research included 112 mostly African American babies from households with very poor socioeconomic status (low income and maternal education) and several risk factors such as paternal absence, welfare receipt, and low parental IQ, but no neurodevelopment problem.

Both the comparison and treatment groups got additional health, nutrition, and family support services; however, the treatment group received five years of high-quality educational assistance, five days a week, 50 weeks a year, beginning at the age of six weeks. The Abecedarian study participants were in their late 30s to early 40s when they were examined, giving the researchers a unique glimpse at how childhood events influence adult brain development. After one of the 112 newborns was diagnosed with a congenital disease that disqualified them based on the exclusionary criteria, just 111 infants remained in the research.

The treatment group, however, got five years of high-quality educational support, five days a week, 50 weeks a year, commencing at the age of six weeks. Structural MRI scans were acquired from 47 of the Abecedarian sample, 29 from the early intervention group, and 18 from the comparator group during follow-up exams. The others got the same comprehensive health, nutritional, and social services support as the educational treatment group, as well as any community daycare or other learning opportunities their parents supplied. On a range of variables, such as maternal education, head circumference at delivery, and age at scanning, the two groups were nearly identical.

The subjects were in their late 30s to early 40s when they were examined, giving the researchers a unique perspective on how childhood influences affect the adult brain. The researchers examined the scans for overall brain growth, including the cortex, the brain’s outermost layer, as well as five areas thought to be linked to the intervention’s stimulation of children’s language and cognitive development. The left inferior frontal gyrus and left superior temporal gyrus, which may be related to language, and the right inferior frontal gyrus and bilateral anterior cingulate cortex, which may be related to cognitive control, were among those studied.

A fifth was included since the volume of the bilateral hippocampus is commonly linked to early life trauma and socioeconomic status. The researchers discovered that individuals who received early schooling therapy had larger brains overall, including the cortex. They also noticed that the outcomes of the group intervention treatment for the brain were much better for males than for girls. The reasons for this are unknown, and they are unexpected given that both boys and girls benefited from their early enhanced education in similar ways in terms of behavioral and educational outcomes.

“When we launched this project in the 1970s, the field knew more about how to assess behavior than it knew about how to assess brain structure,” Professor Ramey said. “We were able to measure structural characteristics of the brain thanks to improvements in neuroimaging technology and excellent multidisciplinary cooperation. The prefrontal brain and language-related regions were certainly altered, and this is the first experimental proof of a connection between known early educational experiences and long-term alterations in humans, to our knowledge.”

“We believe that these findings warrant careful consideration and lend further support to the value of ensuring positive learning and social-emotional support for all children particularly to improve outcomes for children who are vulnerable to inadequate stimulation and care in the early years of life,” Craig Ramey said.

The research was funded by the Wellcome Trust, Virginia Tech, the University of Pennsylvania’s School of Arts and Sciences Research Fund, and the William N. Sternberg Fund for Human Information-Processing Research.