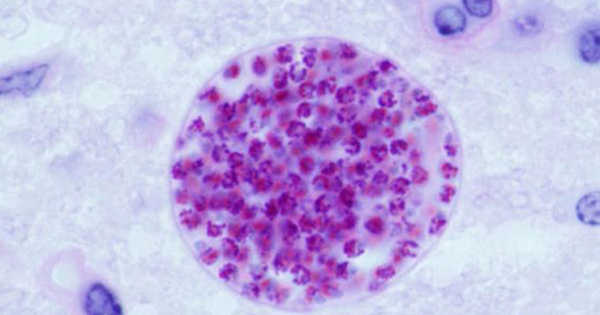 Parasite Infection could help development of Treatments for Mental Disorders

New research into the effects of common parasite infection on human behavior could aid in the development of treatments for schizophrenia and other neurological disorders. T. gondii currently infects 2.5 billion people worldwide, causing Toxoplasmosis.

Scientists believe that changes in behavior in those infected with T. gondii, which infects 2.5 billion people worldwide and causes the disease Toxoplasmosis, could be linked to lower levels of norepinephrine, a chemical released in the brain as part of the stress response. Norepinephrine also regulates neuroinflammation, which is the activation of the brain’s immune system in response to infection.

Neuropsychological disorders such as schizophrenia, Alzheimer’s disease, and ADHD have been linked to norepinephrine and neuroinflammation. Although T. gondii infection is usually asymptomatic in humans, it can cause headaches, confusion, and seizures in others, as well as increased susceptibility to schizophrenia – and can be fatal in immunocompromised patients.

New research into how a common parasite infection alters human behavior could help the development of treatments for schizophrenia and other neurological disorders.

Lower levels of norepinephrine may be linked to behavioral changes in those infected with T.gondii. Norepinephrine also has anti-inflammatory properties. Neuroinflammation and norepinephrine have both been linked to a variety of psychiatric disorders, including schizophrenia and ADHD.

T. gondii can only reproduce sexually in cats. It produces cysts, which are excreted in the cat’s feces. It enters new hosts through ingestion of anything contaminated by these cysts, such as water, soil, or vegetables; blood transfusions from unpasteurized goat’s milk; eating raw or undercooked meat; or transmission from mother to fetus.

After a few weeks, the infection goes dormant, and cysts form in the brain. They can stay there for many years, if not forever. Infection reduces the brain’s immune response regulator norepinephrine during this stage.

The mechanisms by which the parasite affects brain function are still unknown. However, new research from the Universities of Leeds and Toulouse suggests that the parasite’s ability to reduce norepinephrine disrupts control of immune system activation, allowing for an overactive immune response that may alter the host’s cognitive states.

It is a matter of convenience to distinguish parasitic diseases from other infections and tropical medical disorders based on microbiological classification. Organic brain syndromes are linked to both protozoan and helminthic infections; the side effects of drugs commonly used to treat parasites can impair mood and cause anxiety, agitation, or psychosis. Emotional states can, in turn, influence how a person experiences medical illness.

The findings were published in Trends in Immunology as Noradrenergic Signaling and Neuroinflammation Crosstalk Regulates Toxoplasma gondii-Induced Behavioral Changes.

Glenn McConkey, Associate Professor of Heredity, Disease, and Development at the University of Leeds’ School of Biology, who led the study, stated: “Our discovery bridges the gap between two opposing theories about how Toxoplasma alters host behavior, and it may be applicable to other nervous system infections. One school of thought believes that changes in behavior are caused by the immune response to infection, while the other believes that changes are caused by altered neurotransmitters.”

Many factors, both genetic and environmental, have been blamed for increasing the risk of a schizophrenia diagnosis. Some are widely accepted, such as a family history of schizophrenia. Others, such as infection with Toxoplasma gondii, a parasite spread by soil, undercooked meat, and cat feces, are still viewed skeptically. A new study used epidemiological modeling to determine the proportion of schizophrenia cases that could be attributed to T. gondii infection. According to the findings, the parasite may be present in one-fifth of the cases.

“This research will help to fill a critical gap in understanding how brain inflammation affects cognition, which is critical for the future development of antipsychotic treatments.”