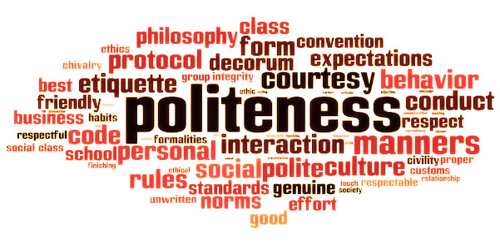 Politeness is a great virtue, and it is a mark of discipline. It is the practical application of good manners or etiquette so as not to offend others. It is a culturally defined phenomenon, and therefore what is considered polite in one culture can sometimes be quite rude or simply eccentric in another cultural context.

While the goal of politeness is to refrain from behaving in an offensive way so as not to offend others and make all people feel relaxed and comfortable with one another, these culturally defined standards at times may be manipulated.

Politeness theory is the theory that accounts for the redressing of the affronts to face posed by face-threatening acts to addressees. First formulated in 1978 by Penelope Brown and Stephen Levinson, politeness theory has since expanded academia’s perception of politeness. Politeness is the expression of the speakers’ intention to mitigate face threats carried by certain face-threatening acts toward another. Another definition is “a battery of social skills whose goal is to ensure everyone feels affirmed in social interaction”. Being polite therefore consists of attempting to save face for another.

To be polite in one’s behavior costs him nothing. Rather it brings many benefits. It will indicate that he is a well-bred man and no one will find any reason to hate him. People will love and respect him. A polite man must be above all meanness. He will be refined in manners, tolerant in views, and supportive of the truth. He will never offend others. Rude behavior is totally unknown to him. He must respect his parents, teachers, and others. Hypocrisy, cruelty, jealousy, and falsehood all are avoided by a polite man. Actually politeness is a spontaneous trait. It can never be artificial. It is ever unchangeable under any circumstances.

The face is the public self-image that every adult tries to project. In their 1987 book, Brown and Levinson defined positive face two ways: as “the want of every member that his wants be desirable to at least some others”, or alternately, “the positive consistent self-image or ‘personality’ (crucially including the desire that this self-image be appreciated and approved of) claimed by interactants”. The negative face was defined as “the want of every ‘competent adult member’ that his actions be unimpeded by others”, or “the basic claim to territories, personal preserves, rights to non-distraction i.e. the freedom of action and freedom from imposition”.

Ten years later, Brown characterized positive face by desires to be liked, admired, ratified and related to positively, noting that one would threaten positive face by ignoring someone. At the same time, she characterized negative face by the desire not to be imposed upon, noting that negative face could be impinged upon by imposing on someone. Positive Face refers to one’s self-esteem, while negative face refers to one’s freedom to act. The two aspects of face are the basic wants in any social interaction, and so during any social interaction, cooperation is needed amongst the participants to maintain each others’ faces.

Politeness costs nothing, but buys everything’. A kind word does not cost anything, yet the world is full of people who will always try to behave in a way that will offend us.

Politeness is a duty which will we owe to ourselves as well as to our neighbors. A person who is polite to others shows that he/she is cultured. A really polite person is equally polite superiors, equals, and juniors. And then, one does not lose anything by being polite to others.

Some studies have shown that women are more likely to use politeness formulas than men, though the exact differences are not clear. Most current research has shown that gender differences in politeness use are complex since there is a clear association between politeness norms and the stereotypical speech of middle-class white women, at least in the UK and US. It is therefore unsurprising that women tend to be associated with politeness more and their linguistic behavior judged in relation to these politeness norms.

Brown and Levinson’s theory of politeness has been criticized as not being universally valid, by linguists working with East-Asian languages, including Japanese. Matsumoto and Ide claim that Brown and Levinson assume the speaker’s volitional use of language, which allows the speaker’s creative use of face-maintaining strategies toward the addressee.

In East Asian cultures like Japan, politeness is achieved not so much on the basis of volition as on discernment (wakimae, finding one’s place), or prescribed social norms. Wakimae is oriented towards the need for acknowledgment of the positions or roles of all the participants as well as adherence to formality norms appropriate to the particular situation. Politeness is essential in all walks of life. In short, a polite man is an ideal of humanity.