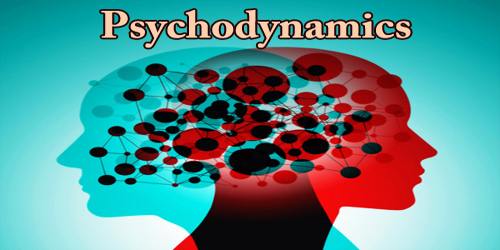 The term psychodynamic theory or psychodynamics doesn’t refer to a single theory; rather it references a number of different psychological theories that make up the psychodynamic perspective. These theories collectively suggest that individual personality is a combination of early childhood experiences and unconscious impulses or desires.

Psychodynamics, also known as psychodynamic psychology, in its broadest sense, is an approach to psychology that emphasizes the systematic study of the psychological forces that underlie human behavior, feelings, and emotions and how they might relate to early experience. It is especially interested in the dynamic relations between conscious motivation and unconscious motivation.

The psychodynamic perspective in psychology proposes that there are psychological forces underlying human behavior, feelings, and emotions. Psychodynamics originated with Sigmund Freud in the late 19th century, who suggested that psychological processes are flows of psychological energy (libido) in a complex brain. In response to the more reductionist approach of biological, structural, and functional psychology movements, the psychodynamic perspective marks a pendulum swing back toward more holistic, systemic, and abstract concepts and their influence on the more concrete behaviors and actions. Freud’s theory of psychoanalysis assumes that much of mental life is unconscious and that past experiences, especially in early childhood, shape how a person feels and behaves throughout life.

There are four major schools of thought regarding psychological treatment: psychodynamic, cognitive-behavioral, biological, and humanistic treatment. In the treatment of psychological distress, psychodynamic psychotherapy tends to be less intensive (once- or twice-weekly) modality than the classical Freudian psychoanalysis treatment (of 3-5 sessions per week). Psychodynamic therapies depend upon a theory of inner conflict, wherein repressed behaviors and emotions surface into the patient’s consciousness; generally, one’s conflict is unconscious.

Between the late 1890s and the 1930s, Sigmund Freud developed a variety of psychological theories based on his experiences with patients during therapy. He called his approach to therapy psychoanalysis and his ideas became popularized through his books, such as The Interpretation of Dreams. In 1909, he and his colleagues traveled to America and gave lectures on psychoanalysis, spreading Freud’s ideas further. In the years that followed, regular meetings were held to discuss psychoanalytic theories and applications. Freud influenced a number of major psychological thinkers, including Carl Jung and Alfred Adler, and his influence continues today.

According to Sigmund Freud, human personalities are made up of three parts:

Psychodynamic theory formed to encompass any theory deriving from Freud’s basic tenets. As a result, the terms psychoanalytic and psychodynamic are often used interchangeably. However, there is an important distinction: the term psychoanalytic only refers to theories developed by Freud, while the term psychodynamic references both Freud’s theories and those that are based on his ideas, including Erik Erikson’s psychosocial theory of human development and Jung’s concept of archetypes. In fact, so many theories are encompassed by the psychodynamic theory that it is often referred to as an approach or a perspective instead of a theory.

According to American psychologist Calvin S. Hall, from his 1954 Primer in Freudian Psychology:

“Freud greatly admired Brücke and quickly became indoctrinated by this new dynamic physiology. Thanks to Freud’s singular genius, he was to discover some twenty years later that the laws of dynamics could be applied to man’s personality as well as to his body. When he made his discovery Freud proceeded to create dynamic psychology. Dynamic psychology is one that studies the transformations and exchanges of energy within the personality. This was Freud’s greatest achievement, and one of the greatest achievements in modern science, It is certainly a crucial event in the history of psychology.”

At the heart of psychological processes, according to Freud, is the ego, which he sees battling with three forces: the id, the super-ego, and the outside world. Hence, the basic psychodynamic model focuses on the dynamic interactions between the id, ego, and superego. Psychodynamics, subsequently, attempts to explain or interpret behavior or mental states in terms of innate emotional forces or processes. In his writings about the “engines of human behavior”, Freud used the German word Trieb, a word that can be translated into English as either instinct or drive.

In the 1930s, Freud’s daughter Anna Freud began to apply Freud’s psychodynamic theories of the “ego” to the study of parent-child attachment and especially deprivation and in doing so developed ego psychology.

Most psychodynamic approaches use talk therapy, or psychoanalysis, to examine maladaptive functions that developed early in life and are, at least in part, unconscious.  Psychoanalysis is a type of analysis that involves attempting to affect behavioral change by having patients talk about their difficulties. Practicing psychoanalysts today collect their data in much the same way as Freud did, through case studies, but often without the couch. The analyst listens and observes, gathering information about the patient. Psychoanalytic scientists today also collect data in formal laboratory experiments, studying groups of people in more restricted, controlled ways.