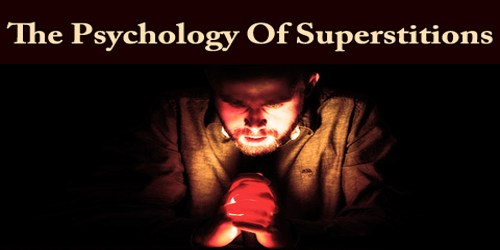 The Psychology Of Superstitions

Superstitions are universal. No one is immune to them. It is commonly applied to beliefs and practices surrounding luck, prophecy, and certain spiritual beings, particularly the belief that future events can be foretold by specific (apparently) unrelated prior events. The word superstition is often used to refer to a religion not practiced by the majority of a given society regardless of whether the prevailing religion contains alleged superstitions.

The word superstition was first used in English in the 15th century, borrowed from French superstition which continues Latin superstitio. The earliest known use as an English noun is found in Friar Daw’s Reply (ca. 1420), where the foure general synnes are enumerated as Cediciouns, supersticions, þe glotouns, & þe proude.

People might be wondering if certain superstitious behaviors such as counting the number of times they tap a ball are really a sign of obsessive-compulsive disorder (OCD). People with OCD often have compulsions to do rituals over and over again, often interfering with everyday life. A good example is Jack Nicholson’s character in the movie As Good As It Gets, who skips cracks in the sidewalk and eats at the same table in the same restaurant every day, with an inability to cope with any change in routine. While some of the symptoms of OCD can mimic superstitious behavior (and the two aren’t mutually exclusive) Stuart Vyse (Ph.D., and the author of Believing in Magic: The Psychology of Superstition calls magical thinking) says most of the evidence would indicate there is no connection between the two.

In 1948, behavioral psychologist B.F. Skinner published an article in the Journal of Experimental Psychology, in which he described his pigeons exhibiting what appeared to be superstitious behavior. One pigeon was making turns in its cage; another would swing its head in a pendulum motion, while others also displayed a variety of other behaviors. Because these behaviors were all done ritualistically in an attempt to receive food from a dispenser, even though the dispenser had already been programmed to release food at set time intervals regardless of the pigeons’ actions, Skinner believed that the pigeons were trying to influence their feeding schedule by performing these actions. He then extended this as a proposition regarding the nature of superstitious behavior in humans.

Jane Risen, a professor of behavioral science at the University of Chicago Booth in Illinois and a member of the American Psychological Society, has used the so-called dual-process model of cognition to explain our belief in superstitions.

According to Risen (and other renowned authors, such as Daniel Kahneman), humans can think both “fast” and “slow.” The former mode of thinking is snappy and intuitive, while the latter is more rational, and its main job is to override the intuitive judgment when it finds errors.

The dual thinking model is an established one, but in the case of superstitions, Risen suggests that the model should undergo refinements. The researcher notes that error detection does not automatically involve error correction. In other words, people can realize that their belief is wrong but still act on it.

The “thinking fast and slow” model “must allow for the possibility that people can recognize in the moment that their belief does not make sense, but act on it nevertheless,” writes the author. “People can detect an error, but choose not to correct it, a process I refer to as acquiescence,” she continues.

In 2013, the psychologist Daniel Kahneman published a book called Thinking Fast and Slow that popularized a growing theory in the psychological literature. The theory outlines two main channels, or “systems,” in which we think, and how the two of them interact can explain how superstitious thoughts originate and stick around.

A recent theory by Jane Risen proposes that superstitions are intuitions that people acknowledge being wrong, but acquiesce to rather than correct when they arise as the intuitive assessment of a situation. Her theory draws on dual-process models of reasoning. In this view, superstitions are the output of “System 1” reasoning that are not corrected even when caught by “System 2”.

The first way, called System 1, represents our immediate gut reactions to the world. It’s the part of our brain that thinks in stereotypes and makes snap judgments. In the case of superstitions, System 1:

A) Tries to find simple cause-and-effect outcomes to make sense of the world.

It makes us think things like: I wore this shirt the last time the Cubs won, so I should wear it again.

B) Begs us not to tempt fate.

System 1 is good at coming up with the worst possible scenario for our actions. And it is really sensitive to irony. “People report that a person is more likely to be rejected from his top-choice university if he presumptuously wears a t-shirt from that school while waiting for the decision,” Risen explains in her paper.

In the case of the Cubs, a superstitious person might think: The one time I don’t wear my Cubs shirt, they’ll absolutely lose.

“When people think about their superstitious intuitions, they are likely to automatically retrieve examples from memory that support them,” Risen writes.

Confirmation bias fuels a cycle that empowers the superstition: The Cubs won because I wore the shirt. It is magic!

System 2 ought to jump in to tell us: Don’t be stupid; ratty old T-shirts don’t win games. Players do. And you’re not a player. Not even close.

But the thing is, Risen argues in an academic review paper, we often willfully ignore System 2. That is, we cave into superstitions even when we know they’re illogical. And there’s research (and common sense) to back this up.

Here’s one clear example: One study had participants throw darts at aboard, and they were rewarded for their accuracy in hitting the bull’s-eye. The researchers found that even with the reward, people were less accurate at throwing darts when there was a picture of a baby on the dartboard, compared with when there was a picture of Adolf Hitler. The darts wouldn’t cause harm to either person, obviously. But it’s hard not to feel superstitious about it.

People seem to believe that superstitions influence events by changing the likelihood of current possible outcomes rather than by creating new possible outcomes. In sporting events, for example, a lucky ritual or object is thought to increase the chance that an athlete will perform at the peak of their ability, rather than increasing their overall ability at that sport. Consequently, people whose goal is to perform well are more likely to rely on “supernatural assistance” lucky items and rituals than are people whose goal is to improve their skills and abilities and learn in the same context.

Psychologist Stuart Vyse has pointed out that until about 2010, “most researchers assumed superstitions were irrational and focused their attention on discovering why people were superstitious.” Vyse went on to describe studies that looked at the relationship between performance and superstitious rituals. Preliminary work has indicated that such rituals can reduce stress and thereby improve performance, but, Vyse has said, “…not because they are superstitious but because they are rituals… So there is no real magic, but there is a bit of calming magic in performing a ritualistic sequence before attempting a high-pressure activity… Any old ritual will do.”

Stuart Vyse, former professor of psychology at Connecticut College, explains in an interview for the British Psychological Society:

“There is evidence that positive, luck-enhancing superstitions provide a psychological benefit that can improve skilled performance. There is anxiety associated with the kinds of events that bring out superstition.”

“The absence of control over an important outcome creates anxiety. So, even when we know on a rational level that there is no magic, superstitions can be maintained by their emotional benefit.” – Stuart Vyse

In a sense, a superstition, like other rituals, can become part of a campus, community or culture, and can help bring people together. “Most of the superstitions people engage in are perfectly fine, and are not pathological,” says Vyse. Now that’s good news, and it’s just in time for Halloween.