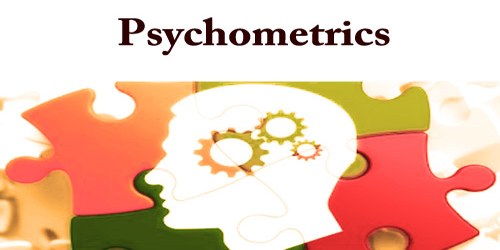 Psychometrics is a field of study concerned with the theory and technique of psychological measurement. The tagline of the Psychometric Society says that the Society is devoted to the advancement of quantitative measurement practices in psychology, education, and the social sciences. This is a very general description of psychometrics, but we emphasize the word quantitative in the previous sentence. Some people take a more clinical view of psychometrics, emphasizing the administration and application of psychological scales. But scale administration is not a particular emphasis of this society.

Psychometrics coined from the Greek words for mental and measurement refers to the field in psychology devoted to testing, measurement, assessment, and related activities. The psychometrics field looks at the theory and technique of psychological measurement, which quantifies knowledge, abilities, attitudes, and personality traits, according to the American Psychological Association (APA).

Research scientists also called psychometricians to create scientifically valid and reliable instruments (such as questionnaires and tests) to collect data and provide a quantitative measure. Today, many employers use tests based on psychometric principles to serve as both pre-hire screening tools and to align existing employees to job roles most suitable for their personality type.

As defined by the US National Council on Measurement in Education (NCME), psychometrics refers to psychological measurement. Generally, it refers to the field in psychology and education that is devoted to testing, measurement, assessment, and related activities. The field is concerned with the objective measurement of skills and knowledge, abilities, attitudes, personality traits, and educational achievement. Some psychometric researchers focus on the construction and validation of assessment instruments such as questionnaires, tests, raters’ judgments, psychological symptom scales, and personality tests. Others focus on research relating to measurement theory (e.g., item response theory; intraclass correlation).

More recently, the psychometric theory has been applied in the measurement of personality, attitudes and beliefs, academic achievement, and in health-related fields. Measurement of these unobservable phenomena is difficult, and much of the research and accumulated art in this discipline has been developed in an attempt to properly define and quantify such phenomena. Critics, including practitioners in the physical sciences and social activists, have argued that such definition and quantification is impossibly difficult and that such measurements are often misused. Proponents of psychometric techniques can reply, though, that their critics often misuse data by not applying psychometric criteria, and also that various quantitative phenomena in the physical sciences, such as heat and forces, cannot be observed directly but must be inferred from their manifestations.

There are several different types of psychometric tests that can be used to assess our academic achievement, job-related skills, attitudes toward people, and the degree to which we can tackle the demands of a job. The Society for Human Resource Management (SHRM) describes the different tests employers might use to screen or place employees.

Psychological testing has come from two streams of thought: the first, from Darwin, Galton, and Cattell on the measurement of individual differences, and the second, from Herbart, Weber, Fechner, and Wundt and their psychophysical measurements of a similar construct. The second set of individuals and their research is what has led to the development of experimental psychology, and standardized testing.

A crucial role was played by Psychometrics, initially defined as “The art of imposing measurement and number upon operations of the mind” (Galton, 1879, p149). Since 1936 the Psychometric Society has been at the forefront of the development of formal theories and methods to study the appropriateness and fidelity of psychological measurements. Because measurement in psychology is often done with tests and questionnaires, it is rather imprecise and subject to error. Consequently, statistics play a major role in psychometrics. For example, members of the society have devoted much attention to the development of statistical methods for the appraisal of noisy measurements whose outcomes are considered indicators of attributes of interest that cannot be directly observed.

Today, psychometrics covers virtually all statistical methods that are useful for the behavioral and social sciences including the handling of missing data, the combination of prior information with measured data, a measurement obtained from special experiments, visualization of statistical outcomes, a measurement that guarantees personal privacy, and so on. Psychometric models and methods now have a wide range of applicability in various disciplines such as education, industrial and organizational psychology, behavioral genetics, neuropsychology, clinical psychology, medicine, and even chemistry.

More recently, the psychometric theory has been applied in the measurement of personality, attitudes, and beliefs, and academic achievement. Measurement of these unobservable phenomena is difficult, and much of the research and accumulated science in this discipline has been developed in an attempt to properly define and quantify such phenomena. Critics, including practitioners in the physical sciences and social activists, have argued that such definition and quantification is impossibly difficult and that such measurements are often misused, such as with psychometric personality tests used in employment procedures:

“For example, an employer wanting someone for a role requiring consistent attention to repetitive detail will probably not want to give that job to someone who is very creative and gets bored easily.”

Using psychometrics, employers can gain a greater understanding of how candidates’ personalities might present the best fit for their workforce. At the same time, candidates can use personality assessments to uncover their strengths and discover what jobs they are best suited to perform.