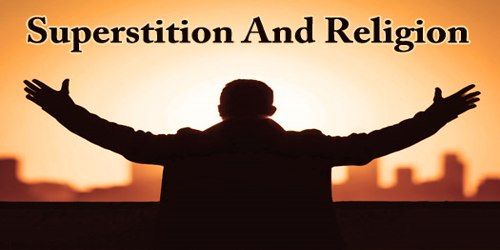 Superstition is a queer concept, and it forms in a certain condition in the human mind. Often, it arises from ignorance, a misunderstanding of science or causality, a belief in fate or magic, or fear of that which is unknown. It is commonly applied to beliefs and practices surrounding luck, prophecy, and certain spiritual beings, particularly the belief that future events can be foretold by specific (apparently) unrelated prior events.

Superstitions are very common. A superstitious person, knowing that there is something higher than he cannot control, believes in the existence of supernatural forces. Superstition arose from a sense of powerlessness to make contact with God. Therefore, a man creates his own religion in which he tries to see certain and clear logic of supernatural forces around him or influence them through his own behavior.

Superstition is a credulous notion, which is a belief in a prediction of our future and an impact on it through the use of any supernatural forces. It contains an assumption, often unconscious, that with the help of these forces it is possible to achieve a compromise, which is acceptable for a man.

Superstition usually manifests itself in reduced forms of a ritual at the behavioral level: the use of mascots, tattoos, magical gestures, etc. A special place occupies different signs and superstitious beliefs: certain events are attributed to prognostic significance.

Greek and Roman polytheists, who modeled their relations with the gods on political and social terms, scorned the man who constantly trembled with fear at the thought of the gods, as a slave feared a cruel and capricious master. Such fear of the gods was what the Romans meant by “superstition” (Veyne 1987, p. 211).

Diderot’s Encyclopédie defines superstition as “any excess of religion in general”, and links it specifically with paganism.

In his Prelude on the Babylonian Captivity of the Church, Martin Luther (who called the papacy “that fountain and source of all superstitions”) accuses the popes of superstition:

For there was scarce another of the celebrated bishoprics that had so few learned pontiffs; only in violence, intrigue, and superstition has it hitherto surpassed the rest. For the men who occupied the Roman See a thousand years ago differ so vastly from those who have since come into power, that one is compelled to refuse the name of Roman pontiff either to the former or to the latter.

The current Catechism of the Catholic Church considers superstition sinful in the sense that it denotes “a perverse excess of religion”, as a demonstrated lack of trust in divine providence (¶ 2110), and a violation of the first of the Ten Commandments. The Catechism is a defense against the accusation that Catholic doctrine is superstitious:

Superstition is a deviation of religious feeling and of the practices this feeling imposes. It can even affect the worship we offer the true God, e.g., when one attributes an importance in some way magical to certain practices otherwise lawful or necessary. To attribute the efficacy of prayers or of sacramental signs to their mere external performance, apart from the interior dispositions that they demand is to fall into superstition. Cf. Matthew 23:16–22 (¶ 2111)

The words “belief” and “faith” have taken on a meaning in common usage that differs from the technical sense that religious philosophers used them. Father Robert Barron says the common usage of the word “faith” is something more like “credulity.” “Faith” is not “credulity” (believing something just because someone has told you that it is so), but rather the rational response to revelation.

Superstitions that belong to a cultural tradition (in some cases inseparable from religious superstition) are enormous in their variety. Many persons, in nearly all times, have held, seriously or half-seriously, irrational beliefs concerning methods of warding off ill or bringing good, foretelling the future, and healing or preventing sickness or accident.

A few specific folk traditions, such as belief in the evil eye or in the efficacy of amulets, have been found in most periods of history and in most parts of the world. Others may be limited to one country, region, or village, to one family, or to one social or vocational group.