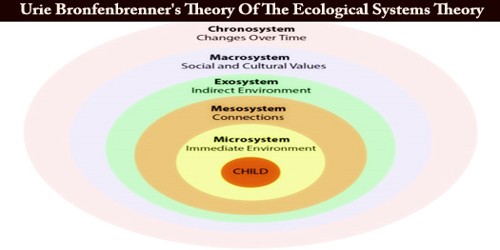 American psychologist, Urie Bronfenbrenner, played a major role in the field of developmental of psychology (Bronfenbrenner, 1979). He was particularly interested in understanding human behavior and how it changes over time in relation to the many and varied elements of a person’s environment. Bronfenbrenner analyzed how human behavior, environment, structural-developmental settings, and ‘the processes that take place within and between them must be viewed as interdependent and analyzed in systems terms”. This was the basic concept of the Ecological Systems Theory.

Bronfenbrenner formulated the Ecological Systems Theory to explain how the inherent qualities of children and their environments interact to influence how they grow and develop. Bronfenbrenner’s theory emphasizes the importance of studying children in multiple environments, also known as ecological systems, in an attempt to understand their development.

According to Bronfenbrenner’s Ecological Systems Theory, children typically find themselves enmeshed in various ecosystems, from the most intimate home ecological system to the larger school system, and then to the most expansive system which includes society and culture. Each of these ecological systems inevitably interacts with and influence each other in all aspects of the children’s lives.

In 1979 Bronfenbrenner wrote the book The Ecology of Human Development (1979). In the book, Bronfenbrenner discusses a developmental framework in which five categories of individuals’ interactions can be viewed in the context of the environment. The five categories consist of microsystems, mesosystems, ecosystems, macrosystems, and chronosystems. Each category exemplifies how systems can be facilitative of human growth depending on the availability of resources (Bronfenbrenner, 1979).

The ecological systems theory holds that we encounter different environments throughout our lifespan that may influence our behavior in varying degrees. These systems include the chronosystem, the macrosystem, the exosystem, the mesosystem, and the microsystem.

The Chronosystem: The Bronfenbrenner theory suggests that the chronosystem adds the useful dimension of time, which demonstrates the influence of both change and constancy in the children’s environments. The chronosystem may include a change in family structure, address, parents’ employment status, as well as immense social changes such as economic cycles and wars.

By studying the various ecological systems, Bronfenbrenner’s Ecological Systems Theory is able to demonstrate the diversity of interrelated influences on children’s development. Awareness of the contexts that children are in can sensitize us to variations in the way children may act in different settings.

For example, a child who frequently bullies smaller children at school may portray the role of a terrified victim at home. Due to these variations, adults who are concerned with the care of a particular child should pay close attention to his/her behavior in different settings, as well as to the quality and type of connections that exist between these settings.

The Macrosystem: The macrosystem is the largest and most distant collection of people and places to the children that still have significant influences on them. This ecological system is composed of the children’s cultural patterns and values, specifically their dominant beliefs and ideas, as well as political and economic systems.

For example, children in war-torn areas will experience a different kind of development than children in peaceful environments.

The Exosystem: The exosystem is the setting in which there is a link between the context where in the person does not have an active role and the context where in is actively participating. Suppose a child is more attached to his father than his mother. If the father goes abroad to work for several months, there may be a conflict between the mother and the child’s social relationship, or on the other hand, this event may result to a tighter bond between the mother and the child.

The Mesosystem: The mesosystem encompasses the interaction of the different microsystems that children find themselves in. It is, in essence, a system of microsystems and as such, involves linkages between home and school, between peer group and family, and between family and community.

According to Bronfenbrenner’s theory, if a child’s parents are actively involved in the friendships of their child, for example, they invite their child’s friends over to their house from time to time and spend time with them, then the child’s development is affected positively through harmony and like-mindedness.

However, if the child’s parents dislike their child’s peers and openly criticize them, then the child experiences disequilibrium and conflicting emotions, which will likely lead to negative development.

The Micro System: The micro system’s setting is the direct environment we have in our lives. Our family, friends, classmates, teachers, neighbors, and other people who have direct contact with us are included in our microsystem. The microsystem is the setting in which we have direct social interactions with these social agents. The theory states that we are not mere recipients of the experiences we have when socializing with these people in the microsystem environment, but we are contributing to the construction of such an environment.

One of the most significant findings that Urie Bronfenbrenner unearthed in his study of ecological systems is that it is possible for siblings who find themselves in the same ecological system to experience very different environments.

Therefore, given two siblings experiencing the same microsystem, it is not impossible for the development of them to progress in different manners. Each child’s particular personality traits, such as temperament, which is influenced by unique genetic and biological factors, ultimately have a hand in how he/she is treated by others.

Value of the Theory –

The Ecological Systems Theory, published in 1979, has influenced many psychologists in terms of the manner of analyzing the person and the effects of different environmental systems that he encounters. The ecological systems theory has since become an important theory that became a foundation of other theorists’ work.