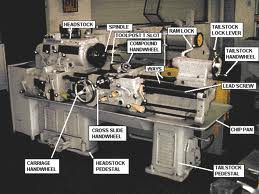 Lathe Introduction
In woodturning, metalworking, metal spinning, and glassworking, a lathe is a machine tool which spins a block of material so that when abrasive, cutting, or deformation tools are applied to the block, it can be shaped to produce an object which has symmetry about an axis of rotation. Most suitably equipped metalworking lathes can also be used to produce most solids of rotation, plane surfaces and screw threads or helices. Ornamental lathes can produce three-dimensional solids of incredible complexity. The material is held in place by either one or two centers, at least one of which can be moved horizontally to accommodate varying material lengths. Examples of objects that can be produced on a lathe include candlestick holders, cue sticks, table legs, bowls, baseball bats, crankshafts and camshafts.

Modes of use
When a workpiece is fixed between the headstock and the tailstock, it is said to be “between centers”. When a workpiece is supported at both ends, it is more stable, and more force may be applied to the workpiece, via tools, at a right angle to the axis of rotation, without fear that the workpiece may break loose.
When a workpiece is fixed only to the spindle at the headstock end, the work is said to be “face work”. When a workpiece is supported in this manner, less force may be applied to the workpiece, via tools, at a right angle to the axis of rotation, lest the workpiece rip free. Thus, most work must be done axially, towards the headstock, or at right angles, but gently.
When a workpiece is mounted with a certain axis of rotation, worked, then remounted with a new axis of rotation, this is referred to as “eccentric turning” or “multi axis turning”. The result is that various cross sections of the workpiece are rotationally symmetric, but the workpiece as a whole is not rotationally symmetric. This technique is used for camshafts, various types of chair legs, etc.
Varieties
The smallest lathes are “jewelers lathes” or “watchmaker lathes”, which are small enough that they may be held in one hand. Although the workpieces machined on a jeweler’s lathes are metal, jeweler’s lathes differ from all other metal working lathes in that the cutting tools (called “gravers”) are hand held, supported by a T-rest, not fixed to a cross slide. The work is usually held in a collet and two spindle bores to receive such collets are common, namely 6mm and 8mm. Two patterns of bed are common, the WW (Webster Whitcomb) bed, which is found only on 8mm Watchmakers lathes which is a truncated triangular prism and the continental D-style bar bed used on both 6mm and 8mm lathes by firms such as Lorch and Star. Other designs have been used, e.g. Boley used a triangular prism as bed on some 6.5mm lathes, and IME used a V edged bed on their 8mm lathes.
Lathes that sit on a bench or table are called “bench lathes”.
Lathes that are controlled by a computer are CNC lathes.
Lathes with a vertical axis are — not surprisingly — “vertical lathes”.
A lathe with a cylindrical tailstock that can rotate around a vertical axis, so as to present different facets towards the headstock (and the workpiece) are turret lathes.
A lathe equipped with indexing plates, profile cutters, spiral or helical guides, etc., so as to enable ornamental turning is an ornamental lathe.
Various combinations are possible: e.g. one could have a “vertical CNC lathe”, etc.
Lathes can be combined with other mechanisms into more complex machines, such as those with an overhead drill or vertical milling unit. These are usually referred to as combination lathes.