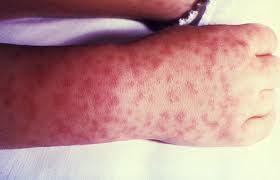 Rocky Mountain spotted fever (RMSF)  is a bacterial infection that is transmitted to humans through the bite of a tick.It is also known as tick-borne disease caused by the organism Rickettsia rickettsii. Although RMSF can be lethal, it is curable. RMSF is the most common rickets infection. The organism is endemic in parts of North, Central, and South America, especially in the southeastern and south-central United States.

Rocky Mountain spotted fever is a tick-borne bacterial disease that affects the cells in the lining of your blood vessels, making the vessels leak. This can eventually cause serious damage to internal organs, particularly your kidneys.

How can produce the disease?

Rocky Mountain spotted fever is caused by the bacterium Rickettsia rickettsii. The bacterium is spread to humans through the bite of infected ticks. It  occurs when a tick carrying the bacterium R. rickettsii bites the skin. The tick sucks in blood and causes an infection where the bacterium streams into the veins and spreads to the rest of the body. It is possible to contract the infection by crushing an infected tick where its blood comes into contact with an open wound, cut or graze.

There are common signs that can help keep the condition from deteriorating. If you notice insect-bite marks on your body, watch for symptoms that include-

Treatment for this diseases:

People who develop Rocky Mountain spotted fever are much more likely to avoid complications if treated within five days of developing symptoms.

Doxycycline is the most effective treatment for Rocky Mountain spotted fever, but it’s not a good choice if you’re pregnant In that case, chloramphenicol as an alternative.

The name of other Antibiotic: Tetracyclines, Chloramphenicol

Long-term effects include partial paralysis of the lower part of the body as a result of the nervous system being affected. One might get gangrene of fingers, toes or legs, which may require amputation. Other effects are hearing loss, blindness or speech disorders. It is also possible to have loss of bladder control and movement disorders.

Rocky Mountain spotted fever can lead to kidney failure, as well as shock, in patients who do not receive medical treatment, including antibiotics.

It is very difficult to diagnose a case of Rocky Mountain spotted fever because symptoms are nonspecific and mimic those of many other conditions. Watching out for tick bites can prevent the disease. This can be done by watching out when visiting tick-infested areas, places with wild animals and vegetation. It is advisable to put on insect repellant in such circumstances. Have pets at home checked by a veterinarian regularly. Make sure pets are clean, together with their habitat. Cut long grass because it might harbor ticks.