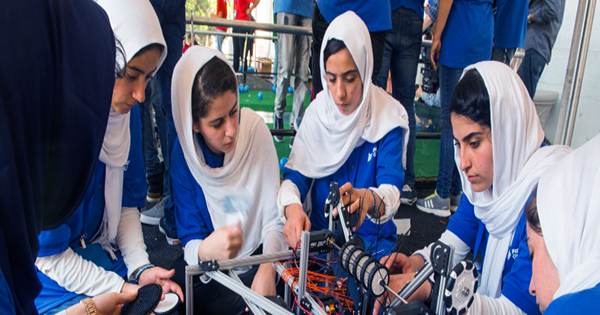 When travel to the United States was banned in 2017 before winning silver for a daring feat at the First Global Challenge in Washington D.C., the so-called Afghan All-Girl Robotics team is now “begging” Canada to go to them. The robotics team – called “Afghan Dreamers” – has come up with unique innovations since its inception four years ago, including low-cost, hand-operated ventilators for coronavirus patients, discarded parts from old Toyota Corollas, a typical car in Afghanistan.

The young women were looking forward to a long and successful career in STEM, but after the fall of Kabul to the Taliban, they were known to be “terrified”. “What’s happening to little girls this past week is that the Taliban are literally going from house to house taking girls out and forcing their children to be brides,” human rights lawyer Kimberley Motley told the Canadian Broadcasting Corporation (CBC).

We are very concerned about what is happening with this Afghan Girls Robotics team – these girls who want to be engineers, they want to be in the AI ​​community and they dare to dream of success. Lawyers said they were “literally begging” the Canadian government and Prime Minister Trudeau specifically to allow the team to come to Canada, where they met with Trudeau after winning another robotics competition in 2018.

“They want to be educated,” Motley told CBC. “They want to be in a safe place. They want to make Afghanistan proud, and they want to make the world proud and move forward with their dream of robotics, their A.I. dream.” “They believe that Canada will basically be an amazing place to continue a future.” The message is completely different from the speech given by the team captain Fatemah Qaderyan at the Oslo Freedom Forum in 2018 captain.

“Everything starts with a child’s imagination,” Fatema said as she spoke. “After a while, the imagination grows and becomes a dream. Once they get that dream, they want to make it a reality. However, children who live in conflict areas […] are told that their dreams will be just dreams.” “Leadership must be in the hands of young people, a generation that sees technology as a weapon against war. Now that we have our first taste of education, we want to get as much as possible to build a better future for ourselves.”