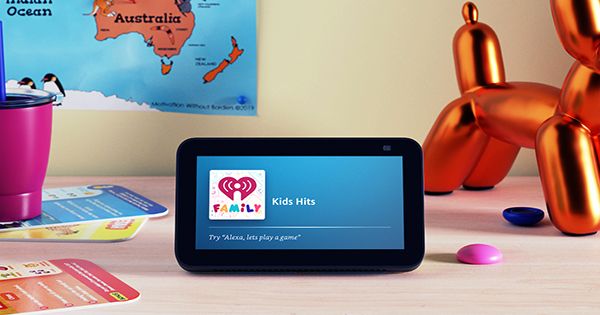 Amazon today unveiled Amazon Glow, a new interactive device geared at families that allows children to make video calls to family members and other distant loved ones. While Amazon Glow is a competitor to Facebook’s Portal devices, which are also primarily geared at connecting families over video, it stands out by offering more than simply another connected screen experience. It also makes use of technology to create an interactive, projected space in front of the device that serves as a platform for virtual activities like as games, painting, puzzles, and more, giving the impression of being in person.

Amazon Glow accomplishes this by combining immersive projection, sensor technologies, and video into one device, the Glow, unlike other smart screens on the market, does not resemble a small TV. Instead, the tablet’s 8-inch display stands vertically, and a projector generates a 19-inch touch-sensitive surface in front of it for playing virtual games and other activities with faraway family members using their own tablets. This game is played on a specific mat that comes with the gadget as well.

Kids and their loved ones can play games like Chess, Checkers, Go Fish, and Memory Match with Amazon Glow. They can read together from a library of thousands of children’s books or draw with digital pencils, crayons, brushes, or spray paint, among other things. The goal is to make the distant, digital gaming feel more like what you’d get if you were in the same room as the other person.

The Amazon Glow is also capable of combining physical and digital activity. It may, for example, scan a child’s favorite toy and convert it into a bespoke jigsaw puzzle by projecting the digital scan onto a flat surface in front of the device. The youngster then uses their hand to shatter the digital scan into pieces, transforming it into a puzzle. Alternatively, kids can scan a drawing they produced on paper and then digitally draw on the scanned version to create a new artwork with the help of a family member.

It also includes “Glow Bits,” which are tangible products that are designed to function with the new device. The Tangram puzzle game is the first Glow Pieces kit, in which the youngster solves difficulties with the puzzle bits while a distant family member plays along using digital puzzle shapes on their tablet screen. Glow will support special activities from characters from popular children’s shows such as Anna and Elsa from “Frozen,” Woody and Buzz from Disney and Pixar’s “Toy Story,” characters from Mattel’s Barbie and Hot Wheels, Nickelodeon’s SpongeBob SquarePants and Dora the Explorer, Elmo, Zoe, and others from “Sesame Street,” and others at launch.