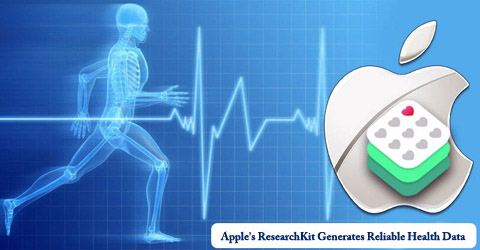 Health data collected entirely from smartphones can be reliable, research from Mount Sinai Hospital claims. The researchers involved found — as noted by The Verge — that Apple’s ResearchKit platform and an app for asthma were fairly accurate when compared to existing patient studies.

ResearchKit turns an iPhone into a tool for medical research by helping doctors, scientists and other researchers gather data more frequently and more accurately from participants anywhere in the world using iPhone apps. Participants enrolled in these app-based studies can review an interactive informed consent process, easily complete active tasks or submit survey responses, and choose how their health data is shared with researchers, making contributions to medical research easier than ever. Finding and recruiting participants is a big hurdle for medical studies. In recent years, people have started collecting health data from smartphones, which seems sensible given how common smartphones are. But this raises questions about whether data gathered this way can be trusted. This is good news since smartphone usage is only increasing — there are supposed to be 6 billion smartphones used worldwide by 2020 — and collecting reliable health data from them could be very good for research.

Apple has made ResearchKit “open source,” which means a developer can quickly design a research study for iPhone. Developers can also build on the available software code and contribute their tasks back to the community to help other researchers do more with the framework. Using a new module just released to the open source community, researchers can now incorporate genetic data into their studies in a seamless, simple and low cost way.

Apple launched ResearchKit, a software medical platform, in 2015. It helps researchers recruit participants for studies; participants can enroll in trials and take surveys or provide other data. Early research partners included big names like the University of Oxford, Stanford Medicine, and the Dana-Farber Cancer Institute. The asthma mobile app from today’s study was one of the five disease-specific apps that Apple launched with the initial release of ResearchKit. In the Mount Sinai Hospital study, nearly 50,000 iPhone users downloaded the asthma app. Of these, about 7,600 people enrolled in the six-month study after completing the consent form. People in the study took surveys on how they treated their asthma; the app also provided information about location and air quality. The scientists then looked at how this patient-reported data measured up when compared to external factors.

Of course smartphone-based studies have limitations, too. The researchers say that this way of gathering data is good for studies that only last for a short amount of time and that need to quickly enroll participants across the country.

And they acknowledge that there are several weaknesses. First is low retention rate. In this study, about 85 percent of people completed at least one survey, while about 30 percent completed more than one over six months. The lack of sustained interest meant incomplete information.

ResearchKit is an open source framework introduced by Apple that allows researchers and developers to create powerful apps for medical research. Easily create visual consent flows, real-time dynamic active tasks, and surveys using a variety of customizable modules that you can build upon and share with the community. And since ResearchKit works seamlessly with HealthKit, researchers can access even more relevant data for their studies — like daily step counts, calorie use, and heart rate. The core ResearchKit framework offers core modules that include a survey engine, visual consent flow, and active tasks. The core framework comes with Swift and Objective-C examples, and full conceptual and API documentation. It has also been localized to many languages.

A task in ResearchKit contains a set of steps to present to a user. Everything, whether the visual consent flow, surveys, or active tasks, is represented as a task that can be presented with a task view controller. Others have pointed out that ResearchKit can run into ethical issues when it comes to data security and making sure people understand all of the risks of volunteering their information.