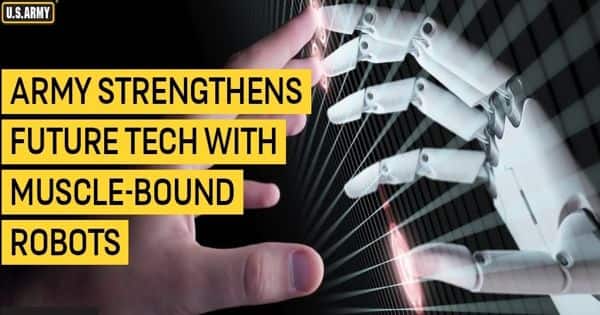 According to Nextgov, ARL scientists are delving into a new field of biohybrid robotics, in which they fuse robotic machinery with living muscle tissue. It’s a strange and unsettling idea, but engineers believe it could lead to a new class of fleshy robots that are more versatile, adaptable, and sophisticated than those made entirely of non-biological materials like metal and plastic.

The combination of living tissue and machinery conjures up images of grotesque cyborgs and far-future sci-fi films, but at the Army Research Laboratory, a robot with living, organic muscles may not be far off. The ARL Combat Capabilities Development Command is collaborating with universities in North Carolina to conduct research on bio-hybrid robotics.

The concept is as fantastical as you might imagine. ARL wants to fuse living tissue with cold metal to create robots with the agility and versatility of living creatures.

The Army Research Laboratory (ARL) is tired of old-school robots that use mechanical actuators — and it wants to give military tech a biological upgrade.

“Bio-hybrid robotics as a field is very young,” said Dean Culver, an ARL research scientist. “The primary limitation of today’s robot is its lack of power, strength, and versatility. They can only do specific tasks for a limited amount of time. However, it is not on the same order of magnitude that an organism can do the same thing. We still don’t have robots that can enter an unknown environment and adapt to what they see. These are all problems that we believe a bio-hybrid or bioinspired engineering design can address.”

ARL’s vision is to grow tissue in a lab and then connect that tissue between linkages in a robot’s joints. Instead of relying on static joints made of synthetic materials, this technology could allow robots to be stronger and adapt faster to different terrains.

“One of the real advantages of muscle and the tendons and ligaments associated with the rest of the kinetic chain in organisms is flexibility,” Culver said. “There will be no disaster. I can slip and adjust a little bit without falling.”

Part of the dream is to have robots that can respond to unexpected terrain or other surprises via artificial reflexes. Dean Culver, an ARL scientist, told Nextgov about walking through a field and inadvertently stepping one foot into a rabbit hole. A living thing can shift their balance and adjust on the fly to avoid falling or twisting their ankle, whereas a conventional robot will plop right in and be forced to rely on shock absorbers to avoid injury.

“Robots that are obviously going to go into unknown and unpredictable environments in Army applications — they need to be able to adapt to things that they weren’t planning for,” Culver said. “So, that’s a big part of this effort as well.”

However, a biohybrid robot capable of such agility is still a long way off. The ARL is still working on connecting muscles to machinery and controlling them — like a spring that can tell when to shrink or stretch.

“We’re going to learn the principles that make biology great at what it does,” Culver told Nextgov, “and then we’re going to remove everything that holds biology back.”

Military robots are self-driving or remote-controlled mobile robots designed for military applications ranging from transportation to search and rescue to attack. Some of these systems are already in use, and many more are in the works.

The Army wants the first biohybrid robot applications to focus on legged platforms. The Army currently has a Legged Locomotion and Movement Adaptation research platform that is a perfect example of the type of robot the service could work on. ARL is currently looking for additional project partners.