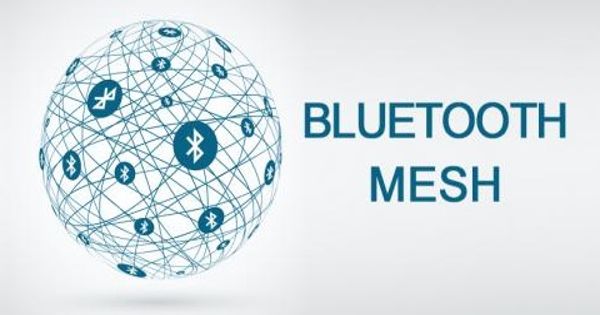 Bluetooth Mesh was conceived in 2014 and adopted on July 13, 2017. The Mesh Profile was released in mid-2017 and roughly corresponded to the availability of new Bluetooth 5 devices. Therefore, it was easy to assume that Bluetooth Mesh was an exclusive feature of Bluetooth 5. It is ideally suited for building automation, sensor network, asset tracking, and other IoT solutions that require tens, hundreds, or thousands of devices to communicate with one another.

Bluetooth Mesh is a mesh networking standard that operates on a flood network principle. Unlike traditional IP-based networks, Bluetooth Mesh uses a managed flood routing model for forwarding messages from one node to another.  It’s based on the nodes relaying the messages: every relay node that receives a network packet that authenticates against a known network key that is not in message cache, that has a TTL ≥ 2 can be retransmitted with TTL = TTL – 1. Message caching is used to prevent relaying messages recently seen. Bluetooth mesh networking uses Bluetooth LE, which is designed for short-burst wireless connections and is ideal for the many-to-many device messaging.

Bluetooth mesh communicates via messages. Communication is carried in messages that may be up to 384 bytes long when using the Segmentation and Reassembly (SAR) mechanism, but most of the messages fit in one segment, which is 11 bytes. These messages can support up to a twenty-nine-byte payload. Based on the payload size, we can see that most of the payload is likely oriented to transferring states of the elements. Each message starts with an opcode, which may be a single byte (for special messages), 2 bytes (for standard messages), or 3 bytes (for vendor-specific messages).

Here are some benefits of a mesh network:

Mesh is a network topology used for establishing many-to-many (m:m) device communications. Probably the most involved process in Bluetooth mesh is the provisioning of new devices. Provisioning is the process of enabling a device to join the network by adding security keys, setting subnets, etc. All in all, Bluetooth Mesh is a strong candidate for Industrial IoT due to its interoperability with existing Bluetooth 4+ devices, strong security features, and support of thousands of nodes on a single network. Provisioning can be performed by another node on the network or via a proxy such as a mobile device running a provisioning application.