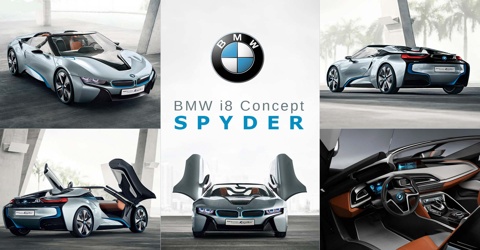 BMW i8 Spyder: Its Tech Is Undeniably Cool

BMW i8 Spyder: Its Tech Is Undeniably Cool

The vehicle was unveiled in Auto China 2012 in Beijing and won Concept Car of the Year, followed by 83rd Geneva International Motor Show 2013. The designer of the BMW i8 Concept Spyder was Richard Kim. The Spyder has a slightly shorter wheelbase and overall length, suggesting that showroom i8s will be more compact than the concepts we’ve seen so far.

It keeps the ‘swan’ doors, though, swivelling upwards despite its cabrio silhouette. It’s been enabled by the carbon-rich structure of the i8, which creates a very stiff structure. The passenger ‘Life’ cell is made from carbonfibre reinforced plastic (CFRP) while the ‘Drive’ platform underneath is made from aluminium. The lithium-ion battery is housed in the car’s spine, helping give a low centre of gravity and BMW’s preferred 50:50 weight distribution.

The exact release date for the i8 Spyder is not yet revealed, however, Harald Krüger, Chairman of the Board of Management of BMW AG, confirmed that the BMW i8 Spyder will arrive sometime in 2018. BMW also confirmed that the i3 will get an increase in range before the year is out.

Like the i8 coupe, this car has a plug-in hybrid powertrain to produce supercar performance for claimed supermini emissions.

A 129bhp electric motor drives the front wheels, while a three-cylinder turbo petrol engine sends 220bhp to the back axle. Total system output is 349bhp and 406lb ft of torque. Which explains why BMW is quoting 0-62mph in 5.0sec and a limited 155mph top speed? Yet the two-seater i8 Spyder is claimed to manage 94mpg on the European test cycle, although today’s announcement doesn’t say whether that’s the combined total figure or an economy on the easier extra-urban cycle.

The i Vision Future Interaction is just one of BMW’s impressive array of concept technologies shown at this year’s CES. BMW’s “Internet of Things” technology connects the car closely to smartphones and -watches, as well as electronically controlled homes, including a “Mobility Mirror.” “Remote 3D” turns the car into a surveillance device, filming its surroundings and uploading them to the user. And the cameras are triggered when the car gets damaged or someone tries to break into it. “BMW Connected” analyzes the user’s habits and predicts their personal routes and preferences with increasing accuracy. There’s an i8 fitted with a plethora of cameras in place of mirrors, as well as “Connected Ride” motorcycle tech that includes a helmet with a built-in head-up display and a K1600GTL bike with laser headlamps. Finally, BMW is once again showing off a street lamp that serves as a charging device for electric vehicles like the i3 and plug-in hybrids like the i8. Current i8 coupe is powered by a beast, a turbocharged 1.5-liter 3-cylinder producing a whopping 362 horsepower which is able to reach 0-62 mph in a mere 4.4 seconds with a top speed of 250 km/h (155 mph). i8 Spyder is rumored to feature similar specs. The codename given for the new convertible is I15, and it will surely be the king of dynamic capability and efficiency with an exclusive aesthetic allure.

The i8 is part of BMW’s “Project i” and it is being marketed as a new brand, BMW i, sold separately from BMW or Mini. The BMW i3, launched for retail customers in Europe in the fourth quarter of 2013, was the first model of the i brand available in the market, and it was followed by the i8, released in Germany in June 2014 as a 2015 model year. Other i models are expected to follow.