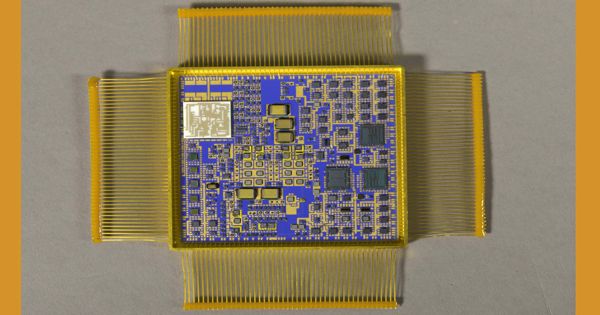 Bubble memory is a type of non-volatile computer memory that uses a thin film of a magnetic material to hold small magnetized areas, known as bubbles or domains, each storing one bit of data. It was a method of recording data in bubble-like magnetic regions on the surface of a chip. The material is arranged to form a series of parallel tracks that the bubbles can move along under the action of an external magnetic field.

Bubble memory would replace the hard disk, said its proponents. The bubbles are read by moving them to the edge of the material where they can be read by a conventional magnetic pickup, and then rewritten on the far edge to keep the memory cycling through the material. Not only would it retain its memory after the computer had been turned off, unlike Dynamic Random Access Memory (DRAM) chips, but it wouldn’t have any moving parts. In operation, bubble memories are similar to delay line memory systems.

Bubble memory started out as a promising technology in the 1980s, offering memory density of an order similar to hard drives but performance more comparable to core memory while lacking any moving parts. Perhaps its most noteworthy advantage was a ruggedness that attracted the military, which continued to use the technology after its failure in the market. This led many to consider it a contender for a “universal memory” that could be used for all storage needs. Bubble memory can withstand high temperatures, dust, humidity, and high radiation without falling; it’s also removable.

The introduction of dramatically faster semiconductor memory chips pushed the bubble into the slow end of the scale, and equally dramatic improvements in hard drive capacity made it uncompetitive in price terms. It played a role in the Persian Gulf War where its low capacity, slow speed, and high price were offset by the need for reliability, data integrity, and, for the Pentagon, data security.

Bubble memory was invented in Bell Labs in the 1970s by Andrew Bobeck who also worked on magnetic core memory and twistor memory. It was used for some time in the 1970s and 80s where its non-moving nature was desirable for maintenance or shock-proofing reasons. It was a promising technology in the 1980s, offering similar density to hard disk drives and similar performance to core memory, but major advancements in both hard disk and semiconductor memory chips pushed bubble memory into the shadows.

Bubble memory was no longer being manufactured and sold within 10 years of its development, having been replaced by the HDD and DRAM in the 1980s. The introduction of Flash RAM and similar technologies rendered even this niche uncompetitive, and bubble disappeared entirely by the late 1980s.