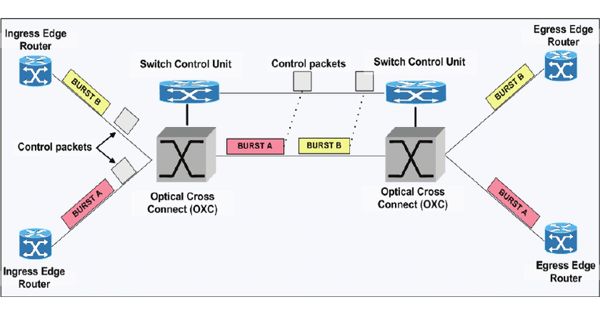 Burst Switching – in the packet-switched network

In a packet-switched network, burst switching is a capability in which each network switch extracts routing instructions from an incoming packet header to establish and maintain the appropriate switch connection for the duration of the packet, following which the connection is automatically released. So rather than setting up the permanent paths in advance, the routing paths can be arranged burst by burst.

Burst switching doesn’t make sense unless you understand the system constraints that make it worthwhile. Optical Burst Switching (OBS) has been proposed to avoid potential electronic bottlenecks. In an optical system, you have oodles of available bandwidth in the form of “lambdas” or open channels on fiber. OBS aggregates a number of client packets in a burst and then switches the burst in the core network. Traditionally, a circuit switching-based wavelength routing scheme has used for optical signal transmission to communication in the optical domain. This concept is useful in terms of secure information transmission.

The optical burst switching has been considered as the temporary solution of optical packet switching. It partially has the property of optical circuit switching and optical packet switching. The basic concept of optical burst switching is that, before transmitting the optical bursts which contain lots of packets assembled at the ingress node, the burst control packet (BCP) is transmitted in advance to make a reservation for the burst. OBS management relies on the information of the control channel being manipulated in the electrical domain while payloads use data channel and are transmitted without conversion to the electrical domain

Typically, optical switching means that you permanently route one lambda to another (optical circuit switching) and send all data along that optical circuit. In concept, burst switching is similar to a connectionless-mode transmission, but differs in that burst switching implies an intent to establish the switch connection in near real-time so that only minimum buffering is required at the node switch. This means you have to plan in advance and dedicate a whole circuit to the data path. What you’d rather do is observe packets and switch paths based on a packet header (optical packet switching) but this is actually impossible to do on a packet-by-packet basis at optical speeds with current technology.

A variant of burst switching used in optical networks is optical burst switching. It is a compromise, which can be thought of as “just in time optical circuit provisioning.” Data for a common destination (a “burst”) is collected and the path provisioned for delivery in advance of the data arriving at the switch. In an all-optical network schemes, all of the signals are manipulated in the optical domain. The optical signal does not need to be converted to an electrical signal to process header information.