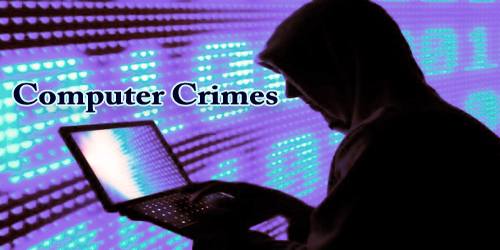 Over the last twenty years. A technological revolution has occurred as computers are now an essential element of today’s society. A large number of computers are used to track reservations for the airlines, process billions of currency for banks, manufacture products for industry, and conduct major transactions for businesses because more and more people now have computers at home as well as at the office. At the same time. It has been observed that there is a surge in crimes involving computers. People commit computer crimes because of society’s declining ethical standards more than any economic need.

These crimes generally involve less technical expertise. Human weaknesses are generally exploited. The damage dealt is largely psychological and intangible, making legal action against the variants more difficult. These are the crimes that have existed for centuries in the offline world. Scams, theft, and the likes have existed even before the development in high-tech equipment. The same criminal has simply been given a tool that increases their potential pool of victims and makes them all the harder to trace and apprehend.

Computer crimes are fast-growing because the evolution of technology is fast, but the evolution of law is slow. While a variety of states have passed legislation relating to computer crimes, the situation is a national problem that requires a national solution. Controls can be instituted within industries to prevent such crimes. Protection measures such as hardware identification, access control software and disconnecting critical hank applications should be devised. However, computers don’t commit crimes; people do. The perpetrator’s best advantage is ignorance on the part of those protecting the system. Proper internal controls reduce crime.