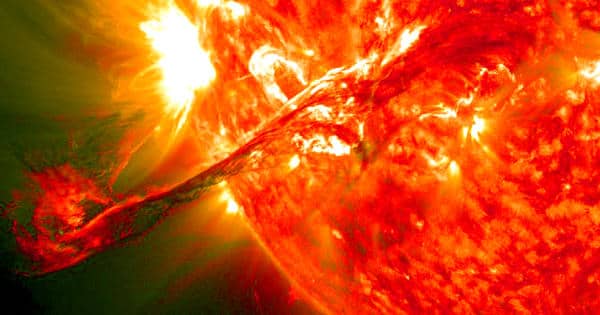 A coronal mass ejection (or CME) is a giant cloud of solar plasma drenched with magnetic field lines that are blown away from the Sun often during strong, long-duration solar flares and filament eruptions. It is a significant release of plasma and the accompanying magnetic field from the solar corona.  They can eject billions of tons of coronal material and carry an embedded magnetic field (frozen in flux) that is stronger than the background solar wind interplanetary magnetic field (IMF) strength. They often follow solar flares and are normally present during a solar prominence eruption. CMEs travel outward from the Sun at speeds ranging from slower than 250 kilometers per second (km/s) to as fast as near 3000 km/s. The fastest Earth-directed CMEs can reach our planet in as little as 15-18 hours. The plasma is released into the solar wind and can be observed in coronagraph imagery. It can cause geomagnetic storms, the same events that create the beautiful aurorae, or northern and southern lights.

A coronal mass ejection can escape from the Sun during eruptions on the Sun like solar flares and filament eruptions.  Important CME parameters used in the analysis are size, speed, and direction. These properties are inferred from orbital satellites’ coronagraph imagery by SWPC forecasters to determine any Earth-impact likelihood. Coronal mass ejections are often associated with other forms of solar activity, but a broadly accepted theoretical understanding of these relationships has not been established. Important aspects of an arriving CME and its likelihood for causing more intense geomagnetic storming to include the strength and direction of the IMF beginning with shock arrival, followed by arrival and passage of the plasma cloud and frozen-in-flux magnetic field. CMEs most often originate from active regions on the Sun’s surface, such as groupings of sunspots associated with frequent flares. Near solar maxima, the Sun produces about three CMEs every day, whereas near solar minima, there is about one CME every five days. 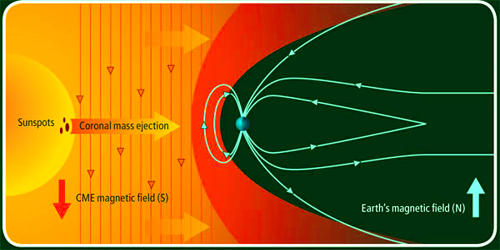 Fig: CME does not lose any energy as it approaches a distance.

When the Sun isn’t very active during solar minimum, coronal mass ejections are rare. There might only be one coronal mass ejection every week. The largest recorded geomagnetic perturbation, resulting presumably from a CME hitting the Earth’s magnetosphere, was the solar storm of 1859 (the Carrington Event), which took down parts of the recently created US telegraph network, starting fires and shocking some telegraph operators. When the Sun’s activity increases towards solar maximum, coronal mass ejections become more common and we can see multiple coronal mass ejections every day. Some telegraphers, on the other hand, were able to continue operating with their batteries disconnected, powered by the aurora-induced currents in the lines, with normal or improved signal quality. CMEs are sometimes associated with short periods of explosive energy release, known as solar flares. These flares frequently occur in active regions during the period around solar maximum.