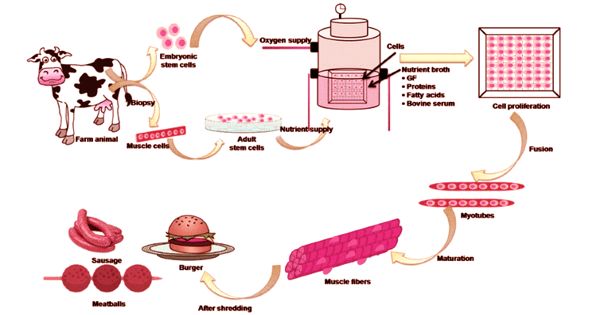 Cultured or in vitro meat, also called “clean meat” by its supporters, is meat produced in a laboratory using bioengineering techniques. Cultured meat is meat produced by in vitro cell culture of animal cells, instead of from slaughtered animals. It is a form of cellular agriculture. If meat can be made without raising animals, health and environmental benefits could be huge. The challenge is to make cultured meat at scale and affordable enough for everyone. To satisfy the increasing demand for food by the growing human population, cultured meat is presented by its advocates as a good alternative for consumers who want to be more responsible but do not wish to change their diet. Cultured Beef is created by painlessly harvesting muscle cells from a living cow. Scientists then feed and nurture the cells so they multiply to create muscle tissue, which is the main component of the meat we eat.

“Cultured meat is meat produced by in vitro cell culture of animal cells, instead of from slaughtered animals. It is a form of cellular agriculture.”

The science behind growing meat without animals is fairly simple. Growing the cells that form cultured meat is not hugely different from other ‘cell culture’ methods that biologists have used to study cells since the early 1900s. Cultured meat is produced using many of the same tissue engineering techniques traditionally used in regenerative medicine. The concept of cultured meat was popularized by Jason Matheny in the early 2000s after co-authoring a seminal paper on cultured meat production and creating New Harvest, the world’s first non-profit organization dedicated to supporting in vitro meat research. Moreover, it has been suggested that the nutritional content of cultured meat can be controlled by adjusting fat composites used in the medium of production. The meat can then be processed using standard food technologies, for example by putting them through a meat grinder to make ground beef. 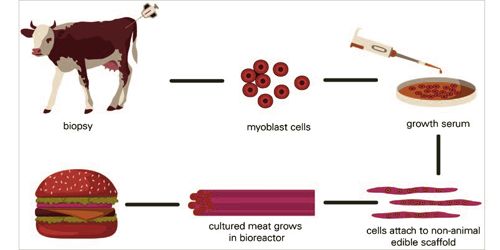 Animal welfare is a major focus of concern in some parts of our modern society. For example, Mark Post observed that there is an increasing trend of awareness of animal welfare among the Western community. In 2013, Mark Post, a professor at Maastricht University, was the first to showcase a proof-of-concept for cultured meat by creating the first burger patty grown directly from cells. Since then, several cultured meat prototypes have gained media attention: however, because of limited dedicated research activities, cultured meat has not yet been commercialized, although several plants for the production of cultured meat are already being built. Because cultured meat is not yet commercially available, it has yet to be seen whether consumers will accept cultured meat as meat. However, nowadays, issues of animal welfare concern mainly cattle feedlots and pig and poultry industrial production units. Indeed, with their very high animal concentrations and associated economies of scale, such industrial units also compete strongly with smallholder farms, which are declining worldwide.

Cultured meat is produced using some of the same technologies biologists have used for decades to grow animal cells. The process of making cultured meat is similar to making livestock meat, except the cells grow outside the animal’s body. The production process still has much room for improvement, but it has advanced under various companies. The cells that are taken are called “myosatellite” cells, which are the stem cells of muscles. The function of these stem cells within the animal is to create new muscle tissue when the muscle is injured. It is this inherent talent of the stem cells that is utilized in making cultured meat.  Its applications lead it to have several prospective moral, health, environmental, cultural, and economic considerations in comparison to conventional meat. The Food and Agriculture Organization of the United Nations (FAO) estimates that the demand for meat is going to increase by more than two-thirds in the next 40 years and current production methods are not sustainable. In the near future, both meat and other staple foods are likely to become expensive luxury items, thanks to the increased demand on crops for meat production, unless we find a sustainable alternative.