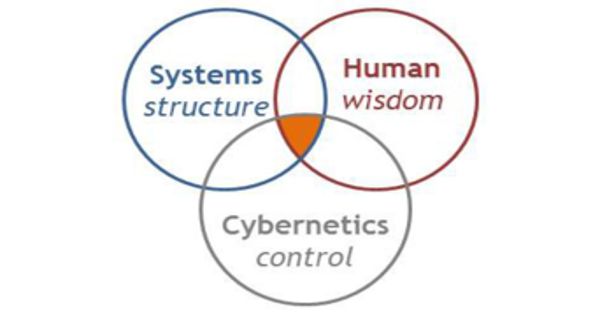 Cybernetics is a transdisciplinary approach for exploring regulatory systems—their structures, constraints, and possibilities. It is concerned with concepts at the core of understanding complex systems such as learning, cognition, adaptation, emergence, communication, and efficiency. Norbert Wiener defined cybernetics in 1948 as “the scientific study of control and communication in the animal and the machine”. This type of organism can be seen as a self-regulating human-machine that make use of sensor, artificial intelligence, and feedback control systems.

Cybernetics is concerned with concepts at the core of understanding complex systems such as learning, cognition, adaptation, emergence, communication, and efficiency.

Cybernetics is the study of human control functions and of mechanical and electronic systems designed to replace them, involving the application of statistical mechanics to communication engineering. It is applicable when a system being analyzed incorporates a closed signaling loop—originally referred to as a “circular causal” relationship—that is, where action by the system generates some change in its environment and that change is reflected in the system in some manner (feedback) that triggers a system change. In addition to this, cyberspace (electronic medium of computer networks in which online communication takes place) is closely related to cybernetic signal processing and communication theory.

Cybernetics is relevant to, for example, mechanical, physical, biological, cognitive, and social systems. It has been influenced by and, in turn, has applications in fields as diverse as psychology and control theory, philosophy and mechanical engineering, architecture and evolutionary biology, or social sciences and electrical engineering. The essential goal of the broad field of cybernetics is to understand and define the functions and processes of systems that have goals and that participate in circular, causal chains that move from action to sensing to comparison with the desired goal, and again to action. It includes not only the science of control but all forms of information processing as well. Its focus is how anything (digital, mechanical, or biological) processes information, reacts to information, and changes or can be changed to better accomplish the first two tasks. It is the science of communication and control theory that is concerned especially with the comparative study of automatic control systems.

Cybernetics as a concept in society has been around at least since Plato used it to refer to government. Cybernetics includes the study of feedback, black boxes, and derived concepts such as communication and control in living organisms, machines, and organizations including self-organization. It focuses on fresh formulations of problems and new methods of investigation.