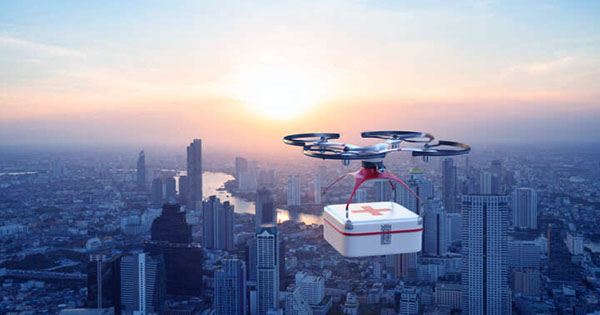 In a medical first, an airborne drone transported donor lungs for transplant between two hospitals promptly and safely. The six-minute journey was the first time a lung has delivered via drone anywhere on the planet. According to the CBC, the flight took occurred on September 25 at around 1 a.m. local time, the lung flown from Toronto Western Hospital to Toronto General Hospital. The location of the first lung transplant in 1983 and the first double lung transplant in 1986, where 63-year-old Alain Hodak would become the world’s first person to receive a pair of drone-delivered lungs.

This advancement in organ transportation is a breath of fresh air (pun intended) for transplants, with the potential to reduce the time it takes for organs to transfer from donor to recipient, especially in urban locations. For patients awaiting transplantation, the minutes saved could be the difference between life and death — time is of the essence when it comes to ensuring that organs for transplant remain viable during transport.

Lungs present a particular challenge in that maintaining them adequately oxygenated and functional is a difficult task. According to the Toronto Star, 80 percent of donated lungs cannot utilize in transplants because of this. In a statement, Mikal Cardinal, vice president of program management for organ delivery systems at Unither Bioélectronique, the firm that developed the drones, said, “This is a big steppingstone both from aviation and a healthcare standpoint.”

Although the historic flight lasting only six minutes, engineers at Unither Bioélectronique had been hard at work for 18 months preparing for it. The team created a lightweight carbon fiber container that can withstand variations in height, pressure, and vibrations, according to the Star. Before it was confirmed fit for its journey, dummy parcels flown and the container was fitted with a parachute and GPS system.

Dr. Shaf Keshavjee, the surgeon-in-chief of Canada’s University Health Network, was waiting for the flying lung. He told the Star, “Seeing it come over the huge buildings was a very exciting moment.” “When it landed and I was able to…see that everything was OK, I definitely breathed a sigh of relief.” The lungs, on the other hand, are not the first organ to fly. In Baltimore, a drone delivered a kidney in 2019, and the drone has delivered corneas and a pancreas since then.

The researchers behind this latest breakthrough expect that it will pave the way for semi-autonomous organ delivery, which will increase the availability and efficiency of organ transplantation.

“With this unique technique, we may one day be able to transport organs with less logistical challenges and eliminate the requirement for complete surgical teams to be transported in larger aircraft.” Simply put, drones may make it easier for organs to reach transplant recipients faster and at a lower cost,” Unither Bioélectronique writes. They also want to improve the range of their drones, with the goal of developing drones that can fly 160 kilometers (100 miles) and subsequently 320 kilometers (200 miles). Martine Rothblatt, CEO of United Therapeutics, the parent company of Unither Bioélectronique, said, “Ultimately, we want to have droned planes carry lungs, hearts, and kidneys throughout all of North America.”