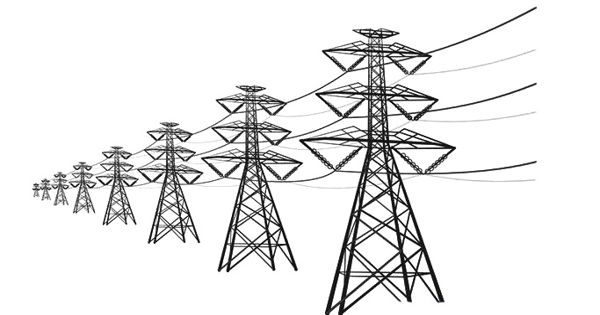 Electricity makes our lives better, brighter, and cleaner. After electricity is generated at a power plant, it needs to be transmitted on high-voltage power lines before it can be distributed to our homes and businesses. Electric power transmission is the bulk movement of electrical energy from a generating site, such as a power plant, to an electrical substation. These systems are formally distinguished by voltage level but harbor profound differences in design and operation. The interconnected lines which facilitate this movement are known as a transmission network. Normal operation has a fixed voltage at every location in the system and a nominal current that is usually in the range of a few hundred to a few thousand amperes. This is distinct from the local wiring between high-voltage substations and customers, which is typically referred to as electric power distribution. An important part of this process includes transformers which are used to increase voltage levels to make long-distance transmission feasible. The network that transmits and delivers power from the producers to the consumers is called the transmission system.

Electric power transmission systems are the means of transmitting power from a generating source to various load centers. A variety of upset conditions can cause the current to increase to higher levels. The combined transmission and distribution network is part of electricity delivery, known as the “power grid” in North America, or just “the grid”. For example, the loss of a transformer in a substation typically requires one or more transformers in the same substation or nearby substations to operate at higher power levels. The interconnected lines that enable the movement of electrical energy are known as a “transmission network,” and these form an electrical power transmission system—or, as it is more commonly known, the power grid. In the United Kingdom, India, Tanzania, Myanmar, Malaysia, and New Zealand, the network is known as the National Grid.

Electrical power transmission involves the bulk movement of electrical energy from a generating site, such as a power station or power plant, to an electrical substation where voltage is transformed and distributed to consumers or other substations. A wide area synchronous grid, also known as an “interconnection” in North America, directly connects many generators delivering AC power with the same relative frequency to many consumers. For example, there are four major interconnections in North America (the Western Interconnection, the Eastern Interconnection, the Quebec Interconnection, and the Electric Reliability Council of Texas (ERCOT) grid). In Europe, one large grid connects most of continental Europe. This energy can be transmitted in AC or DC form. Traditionally, AC has been used for years now, but HVDC (High Voltage DC) is rapidly gaining popularity. During some emergency conditions, however, transformers are loaded to even higher levels, which causes the temperature to increase.