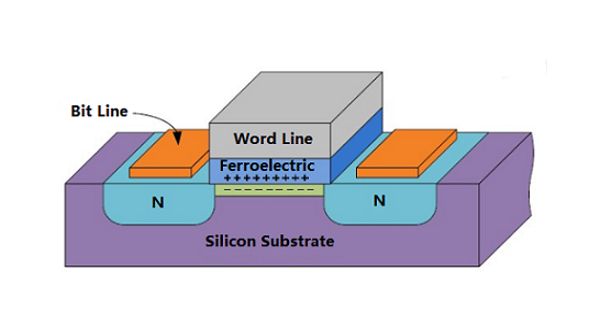 Ferroelectric RAM is a form of random access memory that combines speed & non-volatility. It is simply known as FeRAM, F-RAM, or FRAM, is a random-access memory similar in construction to DRAM but using a ferroelectric layer instead of a dielectric layer to achieve non-volatility. Non- Volatile memory provides the benefits of both Dynamic RAM and ROM. It is able to compete with Flash technology in many areas, although there are several advantages and disadvantages to using it.

Ferroelectric RAM operation and technology are based upon the properties crystals of a dielectric that have a reversible electric polarisation. This technology is non-volatile and it combines this with an almost unlimited number of read-write cycles.

The development of FRAM dates back to the early days of semiconductor technology. FeRAM is one of a growing number of alternative non-volatile random-access memory technologies that offer the same functionality as flash memory. The idea was first proposed in 1952, but it took many years before the idea started to be developed properly as the technologies required to implement it did not exist.

Currently, ferroelectric RAM is not as widely used as many of the more established technologies including DRAM and Flash. FeRAM’s advantages over Flash include – lower power usage, faster write performance and much greater maximum read/write endurance (about 1010 to 1014 cycles). This type of memory consumes less power, is many times faster, and provides more than 1 trillion (1013) read/write cycles. These technologies have become well entrenched and their use is widespread.

FeRAMs have data retention times of more than 10 years at +85 °C (up to many decades at lower temperatures). As developers often tend to rely on trusted technologies that are guaranteed to deliver the performance they require, they are often reluctant to use technologies like FRAM that are not guaranteed to deliver. A further advantage apart from the non-volatile nature of the memory is its very low power consumption which lends itself admirably to use within MCUs where power consumption is often a key issue.

Market disadvantages of FeRAM are much lower storage densities than flash devices, storage capacity limitations, and higher cost. FRAM is able to offer many advantages and can be used in many areas, but as in many cases, the use of FRAM memory is a balance of a number of characteristics and parameters which need to be made for any particular circuit design. Like DRAM, FeRAM’s read process is destructive, necessitating a write-after-read architecture. Common disadvantages compared to Flash –